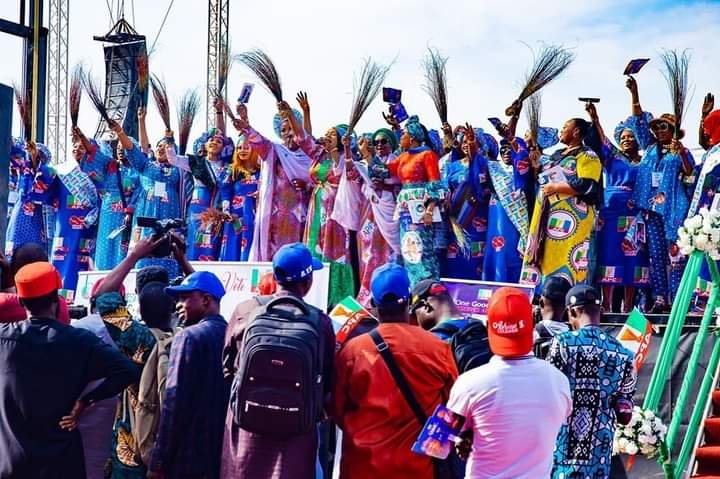 Nigerians have praised the President, of Progressive Young Women’s Forum, Seun Osamaye for her hit song for the All Progressives Congress (APC) campaign.

They also praised Osamaye for her doggedness, hard-work, tenacity, and for always working for the prosperity, development and victory of the party.

The APC women had on Thursday flagged off their presidential campaign for the party’s candidates Bola Tinubu and Kashim Shettima, with a call for women to drive the party to victory in 2023.

At the rally in Ilorin, Kwara state, Osamaye’s song was evidently well received by members of the party.

The song themed, “APC women, Are you ready” was performed on stage by the composer, Osamaye with hundreds of attendees singing and dancing along with her.

With the hashtag #AreyouReadyBySeunOsamaye, a Twitter user, @Darpor wrote, “Monday motivation! @Seunosamaye has taken this anthem from studio to campaign grounds, to households and to offices.”

Similarly, @AdejohSamuelSu1 narrated how the composer lit up the Kwara metropolitan square with her performance. “It was a great day and time as APC women were in awe, when the song was played and performed live on stage by our noble leader @Seunosamaye. It is a song affirming Nigeria’s renewed hope come 2023”

@Ekitiketekan1 wrote that her song could be a national anthem, “Seun Osamaye has outdone herself. Someone send me this video. #AreyouReadyBySeunOsamaye has become the official song of APC and the face of their campaign, this is the song is from my own personal person.”

Another user, @Austine tweeted that, “APC women were extremely jubilating and dancing to the song, ‘Are You Ready’ Video By Seun Osamaye that was performed live on stage as APC Women campaign flag off in Kwara state.”

In a similar tweet, @CeceliaOkpe2 said, “Are You Ready song by talented woman, Seun Osamaye. A song accepted and joyfully sang at APC women campaign flag off in Kwara.”

Jeneral Janet, @Jeneral_JEY narrated how Seun Osamaye’s song defines victory and how the APC presidential candidate, Bola Tinubu prayed for her. “The song clearly defines #RenewedHopeAgenda2023. @officialABAT listened to the lyrics, he commended and prayed for @Seunosamaye for singing his mind in a more pleasant way that Nigerians can relate. We are sure of victory because we are ready.”

Another Twitter user, @Vincent_dBasic stated that, “For the first time in Nigeria a woman hold the record of realising a campaign song for a major party @Seunosamaye.”

We have passport booklets, envoy assures Nigerians in New York