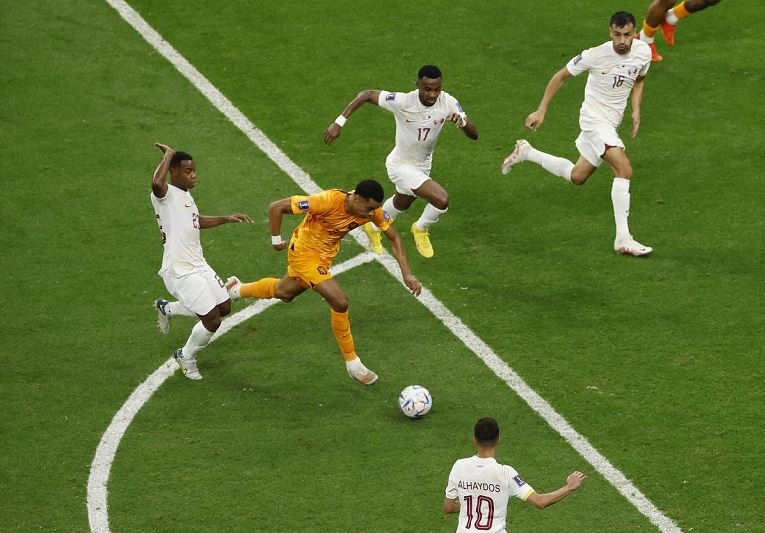 Cody Gakpo continued his prolific run with a third goal in as many games and Frenkie de Jong also scored as the Netherlands beat hosts Qatar 2-0 on Tuesday to finish top of World Cup Group A.

Gakpo’s powerful 26th-minute strike came after passes from Memphis Depay and Davy Klaassen, and De Jong was quickest to react in the 50th minute when Depay’s shot from point-blank range was well saved by Qatar goalkeeper Meshaal Barsham.

The Netherlands, who finished on seven points, await the outcome of the Group B matches later on Tuesday to discover the identity of their last-16 opponents on Saturday.

African champions Senegal beat Ecuador to clinch second place and face the team that finishes top of Group B in the knockout stage.

PSV Eindhoven winger Gakpo has now scored the opening goal in all three of the Netherlands’ group games, driving forward and rasping a finish into the bottom corner on this occasion.

Qatar looked to hit back immediately but Ismaeel Mohammad’s shot on the stretch from outside the area was straight at Andries Noppert.

But Louis van Gaal’s men scored at the start of the second half to quash any Qatari hopes of a comeback as Frenkie de Jong poked into a open net after Memphis Depay’s shot was saved.

The Dutch could have won by more, as Steven Berghuis had a goal ruled out and also hit the crossbar.

Three-time finalists the Netherlands watched on from home four years ago but are making up for lost time by reminding people of their qualities.

The spine running through their side is a formidable one, marshalled at the back by Liverpool defender Virgil van Dijk – their captain – pass master De Jong in the centre of the park and cool finisher Gakpo up top.

And the 23-year-old PSV player’s stock continues to rise after finishing off a team move from Davy Klaassen’s lay-off to become the first Dutch player to net in his first three World Cup games.

Gakpo has been heavily linked with a move to Manchester United and his price tag will be sure to increase with each impressive performance on the global stage.

For club and country, he continues a remarkable season and has now been involved in 35 goals in 29 games – netting on 17 occasions and providing 18 assists.

With a group of boisterous Qatar fans behind the goal looking to rouse their team in the second half, De Jong – who himself could have moved to Old Trafford last summer – shattered any expectations by poking in his first World Cup goal on 49 minutes.

It could have been worse for the hosts but Berghuis had a goal disallowed for handball by Gakpo in the build-up and the substitute’s curling effort struck the bar on a very comfortable evening for the Dutch.

Qatar had actually started the brighter, as captain Hassan Al-Haydos’ long-range strike was gathered by Noppert, while Pedro Miguel volleyed over from a corner.

As well as three consecutive defeats in their first World Cup, Qatar also conceded seven goals, the most by a host nation in the group stages.

With the number of teams increasing from 32 to 48 for the next finals in 2026, Qatar can put this wretched campaign behind them and look forward to trying to qualify in their own right in four years’ time.