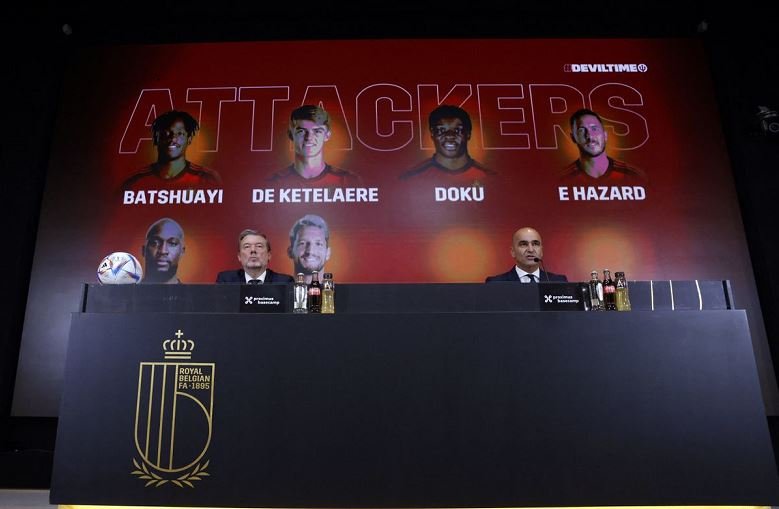 Belgium coach Roberto Martinez has included injured striker Romelu Lukaku and playmaker Eden Hazard in his 26-man squad for the World Cup in Qatar, saying he will give the former “every second” to regain his fitness for the tournament.

Lukaku has been suffering with a hamstring injury which, coupled with a thigh problem earlier this season, means he has played just twice since August and is currently sidelined for his club Inter Milan.

But Martinez has previously stated that as long as Lukaku could feature in one of the team’s Group F games against Canada, Morocco or Croatia, he would take him to the tournament.

Having named four players on a stand-by list – Bryan Heynen, Alexis Saelemaekers, Dodi Lukebakio and Jason Denayer – he has until 24 hours before Belgium’s first game against Canada on Nov. 23 to draft them into the squad if anyone is not fit.

“He (Lukaku) is not completely fit medically, that is clear, but the last three days has been very positive. We will give Romelu every second to be fit,” Martinez told reporters on Thursday.

“At this stage, we feel he will be able to take part in at least one of those three (Group F) games. But we will keep assessing and have up until Nov. 22 to make a decision.

“His situation is similar to (Axel) Witsel’s in the run-up to the previous European Championship. Or Vincent Kompany’s in 2018 (ahead of the World Cup).

“It is not an exceptional situation for us. We want him to play as big a role as he can give.”

Hazard has been mostly on the sidelines at Real Madrid this season and has not played in LaLiga since September having fallen out of favour with coach Carlo Ancelotti.

However, he is a talismanic figure for Belgium and Martinez has set aside concerns with his match fitness and form.

“I am looking for Eden to come as captain of the squad and show what an incredible player we have. He is enjoying his football, I can see that, the only concern is the match fitness.”

Martinez has largely gone with his tried and tested players, but made some wildcard picks, including Everton midfielder Amadou Onana, who he says provides an x-factor.

“It is his profile, it has been refreshing to see his qualities,” the coach said.

“He is completely different from what we have. We have our defensive midfielders, playmakers and attacking midfielders, but he brings physicality and a different profile that is more like Marouane Fellaini in 2018.”