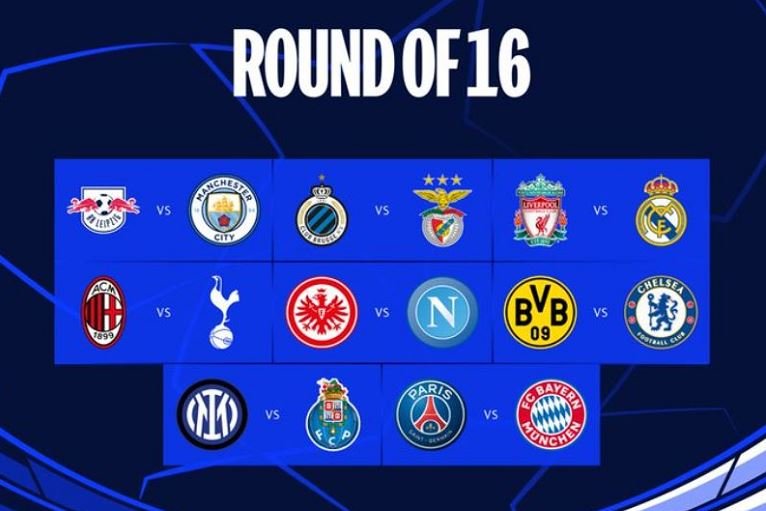 Liverpool have drawn holders Real Madrid in the last 16 of the Champions League in a repeat of last season’s final.

Fourteen-time winners Real Madrid beat Liverpool 1-0 in last year’s final in Paris thanks to a goal from Vinicius Junior in the 59th minute.

It is the fourth time in six seasons that six-time winners Liverpool have taken on Real Madrid in the Champions League.

The Spanish champions also knocked Liverpool out in the quarter-finals in the 2020-21 season.

Jurgen Klopp’s side have been in three of the last five European finals, including last season’s in Paris, and only AC Milan and Real Madrid have won the competition more times.

The organisation of the Reds’ final defeat in Paris was later described as “an abject failure” by European football’s ruling body Uefa after fans were robbed and tear-gassed outside the Stade de France and kick-off was delayed by 36 minutes.

More than 480 testimonies by supporters and journalists at the 28 May final were examined by an independent panel, which included Professor Phil Scraton, who previously led a report into the 1989 Hillsborough stadium disaster.

In the 2018 final, Gareth Bale scored a sensational goal as Real Madrid won their third successive Champions League title with a 3-1 win over Liverpool.

Manchester City reached the semi-finals of the competition last season

English champions City are still yet to win the Champions League but are favourites to go all the way in this season’s competition.

They reached the final in 2020-21 but lost 1-0 to Chelsea before being knocked out by Real Madrid in the semi-finals last year, despite being two goals ahead on aggregate going into the 90th minute.

Their last-16 opponents RB Leipzig failed to progress from the group-stages last season and they currently sit sixth in the German Bundesliga table.

Two-time champions Chelsea also lost to Real Madrid last season in the quarter-finals, while opponents Borussia Dortmund have not gone further than the last eight since reaching the 2012-13 final under former boss Klopp.

Tottenham, who lost to Liverpool in the 2018-19 final in Madrid, will take on seven-time European champions AC Milan for the first time in 11 years.

It is a return to Italy for manager Antonio Conte, who managed AC Milan rivals Inter between 2019 and 2021 before joining Spurs.

Paris St-Germain have not lost a competitive game since March and are bidding for a first European crown with stars Lionel Messi, Neymar and Kylian Mbappe part of the squad.

Italy’s Serie A leaders Napoli take on Frankfurt with their only defeat so far this season coming in the final group-stage match against Liverpool.

Portuguese side Benfica, who face Club Bruges, went through as group winners after an injury-time sixth goal over Maccabi Haifa moved them level with Paris St-Germain in all scenarios and they took top spot by scoring more away goals in the group.