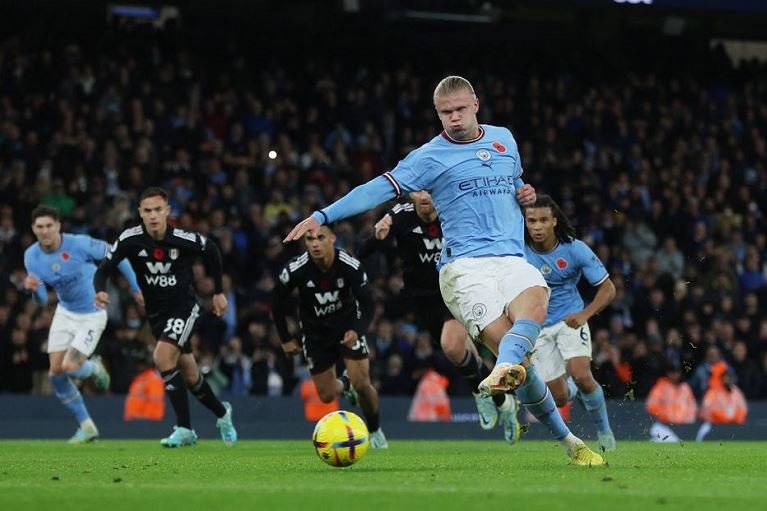 Manchester City substitute Erling Haaland converted a 95th-minute penalty to earn the 10-man hosts a dramatic 2-1 win over Fulham on Saturday, a victory that sent the champions back to the top of the Premier League.

Haaland was only deemed fit enough to start on the bench after missing City’s two previous matches through injury, but there was no stopping the Norwegian scoring phenomenon who came on just past the hour to drag his depleted side to victory.

He had one goal ruled offside before netting the last-gasp penalty, his 23rd goal of the season in all competitions sending City a point clear of Arsenal at the top, albeit having played a game more, just as his side seemed to have run out of ideas.

“I was nervous (for the penalty),” Haaland told Sky Sports. “It was one of the most nervous moments of my life, but fantastic,” he said after City battled for over an hour with 10 men having had Joao Cancelo sent off in the 26th minute.

“A penalty in the last minute, of course I would be nervous. But amazing feeling. I love it. I have been injured for a week and it is really important to win,” Haaland added.

Things started well for a City side who had beaten the two other promoted teams, Bournemouth and Nottingham Forest, by an aggregate of 10-0 at home before Fulham’s visit, with Argentine forward Julian Alvarez firing the hosts into a 17th-minute lead.

The champions thought they had quickly doubled their lead through John Stones but Rodri was offside in the build-up and Fulham capitalised on that reprieve, going straight down the other end and winning a 28th-minute penalty.

City defender Joao Cancelo was given a straight red card for bundling Harry Wilson to the ground, with former Manchester United midfielder Andreas Pereira making no mistake from the spot as Fulham went into the interval level.

Haaland was brought on in the 63rd minute and quickly thought he had restored his side’s lead after glancing a header home from a pinpoint Kevin De Bruyne cross, but the VAR stepped in to rule that the Norwegian had been offside.

Even with their numerical disadvantage, it was City who kept coming, with Fulham looking like the team with 10 men as the visitors hung on with some last-ditch blocks and put every player behind the ball.

It seemed City had done all they could until De Bruyne was brought down in the penalty area, giving Haaland the chance to continue his incredible debut season in England.

It was not the most convincing spot kick but it found the net to send the Etihad Stadium, and City bench, into delirium.

Haaland has now scored 16 goals in his last 10 Premier League appearances. It is the joint-most goals a player has scored across a 10-game period in the competition, matching Luis Suarez’s 16 goals ending in December 2013.

Arsenal have the chance to take back top spot when they travel to Chelsea on Sunday. Fulham stay eighth in the standings on 19 points after a valiant effort in the Manchester rain.

“It was tough on us,” said visiting coach Marco Silva. “We have to understand that some mistakes can happen and we have to learn and grow from them.

“The commitment and attitude were there. We know the reality of the team we are playing against, but we have to look at ourselves and try to improve.”