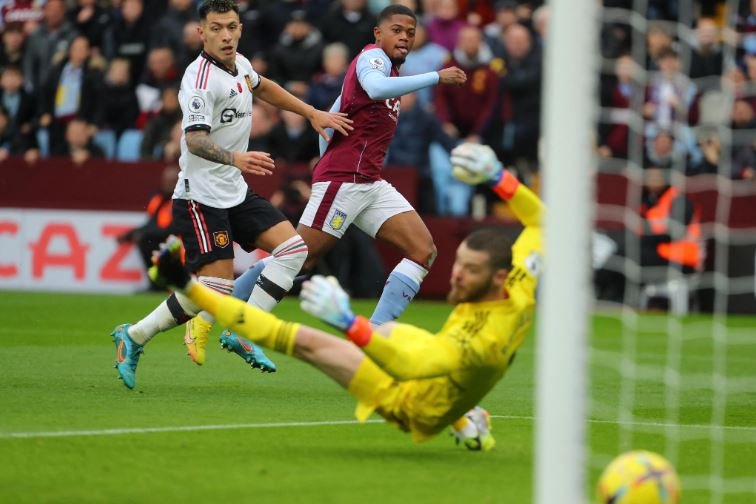 The hosts had not beaten United on home soil in the league since 1995, but were 2-0 up after 11 minutes in this game following an incredible start.

Leon Bailey opened the scoring in the seventh minute when he broke clear of the defence before arrowing a low shot beyond David de Gea.

Things got even better for Villa just three minutes later when Lucas Digne curled in a brilliant free-kick from 25 yards.

Manchester United’s players looked stunned by Villa’s fast start and did not register a meaningful effort until midway through the first half, when Alejandro Garnacho’s shot from an angle was well saved by Emi Martinez.

Cristiano Ronaldo, named captain for the first time under Erik ten Hag, drew another good save moments later with a header as the away side improved before half-time.

A huge slice of fortune got them a goal back seconds before the break when Luke Shaw’s shot took a big deflection off Jacob Ramsey to land in the back of the net, with Martinez unable to react.

But Ramsey delivered the perfect response to that setback after the break when he latched onto Ollie Watkins’ ball and powered a shot beyond De Gea.

There was no way back for Manchester United after that, as Villa fans spent the rest of the game celebrating the start of the Emery era.

The win moved Aston Villa up to 13th, three points above the relegation zone, while Manchester United remain fifth.

Steven Gerrard paid the price for a disappointing start to the season, but Villa wasted no time in bringing in his replacement.

Former Arsenal and Villarreal boss Emery was appointed on 24 October and has been welcomed by Villa fans. There was a positive atmosphere around Villa Park before kick-off, and Emery was loudly cheered as he took his place in the dugout.

Those cheers had barely died down when Villa made the best possible start.

Emery’s impact was immediately clear as his side played with a pace and dynamism that pulled Manchester United apart.

On the touchline, the Spaniard kicked every ball and did not stop giving instructions as he settled into his new job quickly. If this is a sign of things to come for Villa under, it won’t be long before they are no longer looking over their shoulders.

Eyebrows were raised before kick-off when Ronaldo was named captain less than three weeks after he walked out of Old Trafford before full-time in the game against Tottenham.

That initially appeared to mark the end of his time at the club, but Ronaldo has been gradually reintroduced by Ten Hag, who challenged the Portugal international to lead by example on Sunday.

Ronaldo was not as influential as his manager would have perhaps liked, although no Manchester United player covered themselves in glory in their dreadful start to the game.

The United captain was involved in a tussle with Tyrone Mings in the second half, and showed his frustration when he had the chance to fire home a trademark free-kick at 3-1, but slammed it into a wall.

There were then pantomime boos as Ronaldo threw his hands into the air after being penalised for a foul late on to complete a day to forget for the veteran forward and Manchester United.