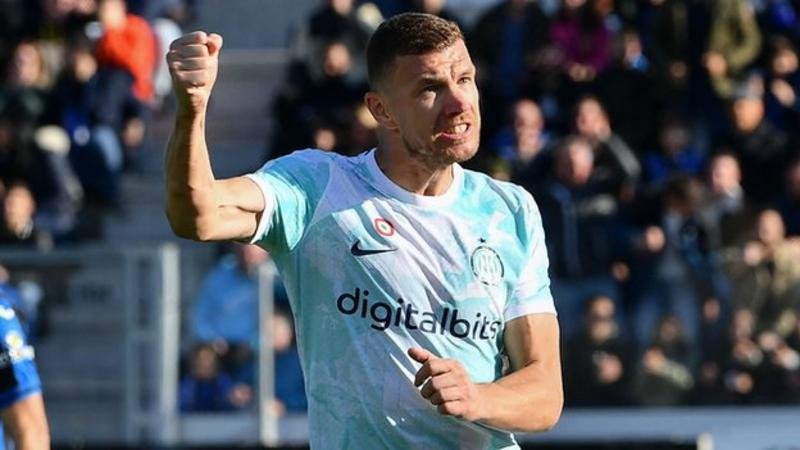 Inter Milan held on to claim an important victory away to fellow Champions League chasers Atalanta in Serie A.

Simone Inzaghi’s side had to come from behind at Gewiss Stadium as Ademola Lookman scored his seventh league goal of the season from the penalty spot to put the hosts in front.

Edin Dzeko brought the visitors level before half-time with a clever finish after being teed up by Lautaro Martinez, then added his second 10 minutes after the restart.

The lead was extended just past the hour mark when Jose Luis Palomino put one through his own net.

Although the centre-back atoned with a goal at the right end to make for a dramatic finish to the game, Inter held on to take the three points.

Inter move level on points with second-placed Lazio and city rival AC Milan in third, but their stay in the top four could be short-lived with Juventus having the chance to leapfrog them again by beating Lazio in the evening kick-off.

Elsewhere, manager Jose Mourinho was sent off before his Roma side salvaged a 1-1 draw at home to Torino thanks to Nemanja Matic’s 94th-minute strike in an action-packed finale at the Stadio Olimpico.

Karol Linetty put Torino ahead early in the 55th minute and, after Mourinho was shown a red card in the 89th minute following an outburst at the officials, Andrea Belotti hit the post with a stoppage-time penalty. But there was still time for Matic to snatch a point for Roma.

Ronaldo slams Rooney, says he feels betrayed by Man Utd and has no respect for Ten Hag