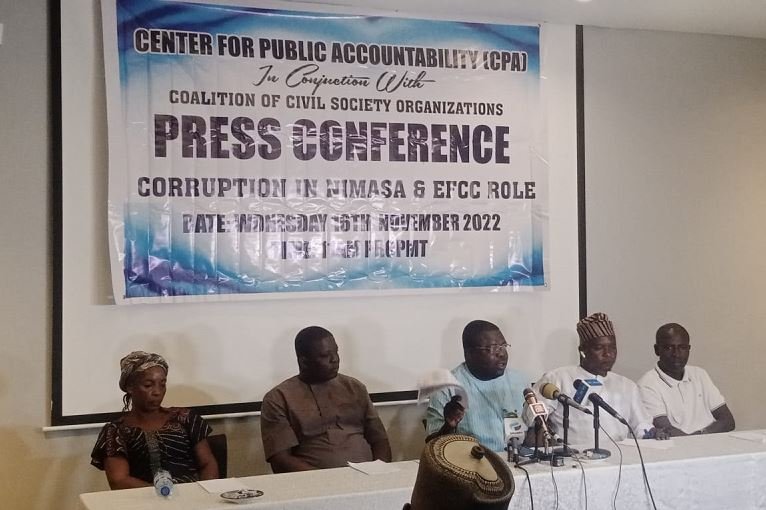 Addressing a press conference in Lagos on Wednesday, the executive director of CPA, Olufemi Lawson, said that repeated efforts to get the EFCC to investigate NIMASA have been futile because Bawa is a beneficiary of the NIMASA boss.

The civil society organisation noted that three of Bawa’s brothers have received academic scholarships from Jamoh and that is why a probe have been impossible.

At the press conference, Lawson said, “Our focus and address today, is premised on the worrisome involvement of the chairman of the EFCC, Mr. Abdurasheed Bawa, whose actions, and abuse of office, is beginning to constitute, an obstruction, to the cause of justice.

“We have waited till today to see if the EFCC, under the leadership of Mr Bawa, will do the needful, as challenged by DG NIMASA himself, to carry out a thorough investigation, into the allegations of diversion of funds, amounting to the tune of N1.5 trillion and $9.8 m dollars respectively, but till date, nothing visible to Nigerians, including our Independent findings, has been done by the EFCC.

“Recall that on May 21, 2021, an online newspaper, Point Blank published an exclusive story in which the newspaper alleged that the DG of NIMASA, Mr Bashir Jamoh, was involved in some shady deals, ranging from blatant corruption and abuse of office.

“We were pleasantly surprised when the accused Mr Bahir Jamoh openly challenged the EFCC to investigate him and make public his findings.

Lawson noted that, “After more than a year, it became a kind of hide and seek game, as nothing has been heard, from the EFCC. It was during this period having followed the allegations with keen interest that we stumbled on reasons, why these allegations against Mr Jamoh, may have been swept under the carpet.

“Curiously, three of the EFCC Chairman’s siblings namely; Mustapha Bawa Yusuf, Bawa Hassan Ibrahim and Haruna Mustapha Bawa are enjoying ‘scholarships’ from Mr Jamoh that the EFCC ought to be investigating at that time. We wonder if this is not corruption and the negotiation for the compromise of the investigation which should have been conducted on Bashir Jamoh; that is, if something is been done in that regard at all.

“The details of how they became beneficiary is in the attached documents. We view this as an act maladministration and abuse of office from the EFCC chairman whose brothers are being sponsored by an accused that is under his radar.

“We want President Muhammadu Buhari to step into this matter, and direct the Independent Corrupt Practices and Other Related Offences Commission ICPC, to take over the Bashir Jamoh’s case with the view to get to the root of the matter.

“We also want the National Assembly, especially the senate to ask the EFCC chairman to step aside, while a thorough investigation is carried out to unravel the mystery behind the ‘scholarships’ given to his siblings.

“We have monitored the EFCC chairman and have discovered that he’s always playing to the gallery instead of facing the task of preventing and fighting corruption headlong.

“To buttress our stand that Abdurasheed Bawa is cherry picking in his investigations two cases will suffice here:

1. You are all aware of the corruption allegations against the Speaker of Lagos State House of Assembly, Mr Mudashiru Obasa. Apart from the sensational report in the media, up till today, more than two years after, he has not been charged and neither has the case been conclusive.

2. Whereas in the case of another Assembly Speaker in nearby Ogun state, Mr Olakunle Oluomo was promptly arrested at the airport and charge to court, by the Bawa led EFCC. Is this not a case of double standard or cherry picking depending on who’s involved?

3. Without prejudice to the ongoing case, EFCC chairman was in the news for wrong reason recently when he was sentenced for contempt.

He added that a judge ruled that a Sport utility Range Rover and N40m be returned to the owner since 2017 and he declined until the judge made that consequential order that he should be arrested and sent to Kuje prison.

Lawson noted that he also did not obey the ruling until he got an appeal court order to vacate the ruling.

“Gentlemen of the press, we are through this forum informing you, that rule of law should be the norm if we truly want an egalitarian society and not the Hobbesian state of nature, where life is solitary, poor, nasty, brutish and short.

“We also attached the link of Pointblank news with this statement for your further information. We thank you all for your attention.”