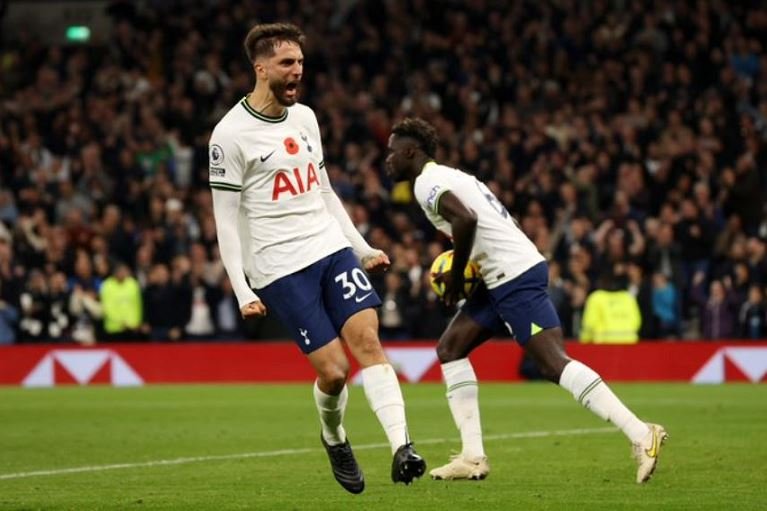 Bentancur fired Spurs level for the third time in the match via a wicked deflection off Luke Ayling, before tapping in Dejan Kulusevski’s low cross to earn Antonio Conte’s side all three points in dramatic fashion.

In a breathless first half, Crysencio Summerville’s fourth goal in as many top-flight games opened the scoring before Harry Kane rifled in an equaliser from close range.

In-form Rodrigo scored his fourth in four league matches to put Leeds ahead again, but Ben Davies snuck a shot beyond Illan Meslier and the retreating Rasmus Kristensen to restore parity for the second time.

Leeds’ misery was compounded when Tyler Adams was dismissed for a second bookable offence with three minutes remaining.

The victory consolidates Spurs’ place in the top four, while Leeds drop two places to 14th.

Conte suggested after Wednesday’s Carabao Cup defeat by Nottingham Forest that Spurs’ busy pre-World Cup schedule had taken its toll on his side, who had lost four of their previous seven matches in all competitions prior to Leeds’ visit.

Slow starts have become a theme in recent weeks and Saturday’s game was no different, Summerville giving the visitors a deserved lead with only 10 minutes on the clock.

Only Bournemouth and Manchester United have conceded more top-flight goals in the opening 15 minutes of games this season than Conte’s side, who have now shipped four in that period.

But the hosts soon started to cause Leeds problems – particularly down the right-hand side, where Leeds defender Pascal Struijk struggled to keep the impressive Kulusevski in check.

Kane’s seventh goal in as many top-flight home fixtures made it 1-1, only for Rodrigo to capitalise on some questionable Spurs defending from a corner to put the visitors back ahead.

The topsy-turvy pattern continued into the second half as Davies squeezed a long-range effort into the net, before Rodrigo’s second of the game put Leeds within touching distance of a third straight league win.

But Tottenham rallied once again as Bentancur – who also scored Spurs’ late winner at Bournemouth two weeks ago – netted his third and fourth league goals of the campaign to send the home fans into ecstasy.

Tottenham have won 13 points from losing positions in the Premier League this season, more than any other team.

Having recovered from 3-1 down to defeat Bournemouth last weekend, Jesse Marsch’s team were given a taste of their own medicine at Tottenham Hotspur Stadium.

This was a game that showcased Leeds’ technical qualities and defensive vulnerabilities in equal measure.

They could have been further ahead by the time Kane fired Spurs level for the first time in the match, Summerville having been denied by Lloris moments beforehand.

While the England captain’s strike was controversial – Leeds felt Meslier was fouled in the build-up to the goal – Kristensen and Meslier will be bitterly disappointed not to have kept out Davies’ hopeful effort, particularly after the Leeds keeper had done well to deny Kane in the build-up.

Rodrigo’s fifth goal in four top-flight outings put Leeds on course for another memorable three points, but they let their advantage slip through their grasp yet again in the final minutes.

Adams’ clumsy challenge on Davinson Sanchez resulted in a second yellow card for the United States international as the Yorkshire club’s recent resurgence shuddered to a halt.