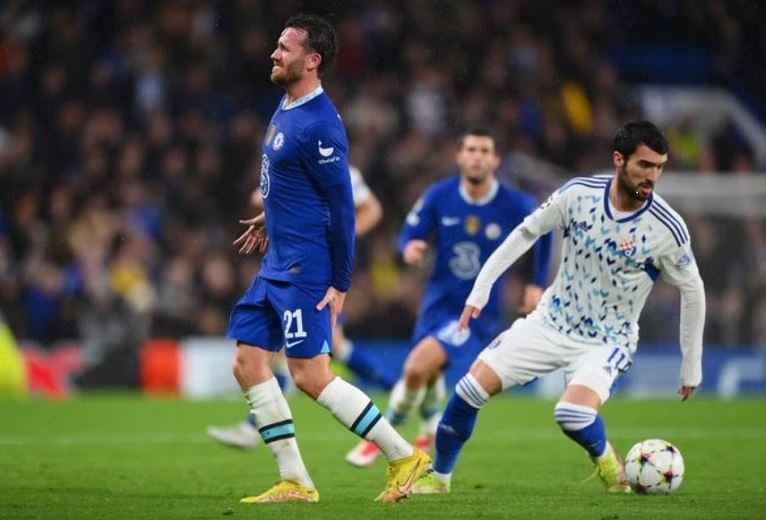 England left-back Ben Chilwell is a doubt for the World Cup after suffering a hamstring injury in Chelsea’s Champions League win against Dinamo Zagreb.

The defender, 25, pulled up in stoppage time after clutching the back of his leg.

Ben Chilwell was unable to continue and was pictured leaving Stamford Bridge on crutches following the Blues’ 2-1 win.

“It’s a blow for us on an otherwise positive evening I think. It’s a blow to see him pull up like that, it’s not a great sight.

England kick off their World Cup campaign in Qatar against Iran on 21 November.

Ben Chilwell has been capped 17 times and was part of the England squad at Euro 2020, although he did not make an appearance during the tournament.

He suffered a ruptured cruciate ligament in November last year and was ruled out until May.

Asked if the injury is a concern for the World Cup, Potter added: “I think you’d have to say so.

“Obviously I don’t want to say any more than that but when a player pulls up like he did, and he felt it, it’s never positive.

“It’s a blow for us and a blow for him and sadly he won’t be the only one who’s affected like that in this period because October was incredibly challenging, the games that we had to play, but it is what it is.”

‘Heartbreaking so close to World Cup’

Former England manager Glenn Hoddle said on BT Sport: “I feel for [Ben Chilwell], dreadfully. Sometimes with a hamstring you get a little warning sign. That’s when you put your hand up.

“That one just went. His face went and as he touches the ball he grimaces and looks in real pain. It looks like a nasty one. I don’t understand why they haven’t carried him off.

Former Chelsea and England midfielder Joe Cole said he felt for Ben Chilwell given how close it is to the World Cup.

“It’s heartbreaking,” he said on BT Sport. “As soon as it happens all you can think about is that it is so close to a World Cup.

“If it’s a hamstring injury usually the least you can hope for is two to three weeks before you get back on to the pitch. It’s really tough. I really feel for him.”