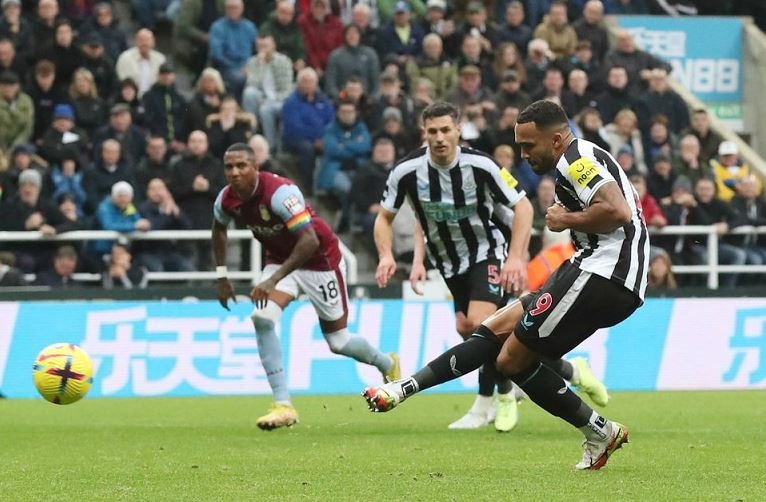 Newcastle had a couple of early chances against a Villa side that thrashed Brentford 4-0 last week after sacking manager Steven Gerrard but the joy of that result was quickly forgotten.

The visitors’ afternoon got off to a bad start when goalkeeper Emiliano Martinez was struck in the head by team mate Tyrone Mings’ knee in the 18th minute and had to be replaced by Robin Olsen 17 minutes later.

Olsen pulled off a good save to deny Almiron but there was little he could do when Villa’s Ashley Young conceded a penalty deep into first-half stoppage time and Wilson blasted the spot kick down the middle to give Newcastle the lead.

Wilson thought he had put his side 2-0 up in the 10th minute of first-half stoppage time when he rounded Olsen and slotted home, but the offside flag went up and the goal was chalked off.

With England manager Gareth Southgate watching from the stands, Wilson got his second with a header after an excellent short corner in the 56th and three minutes later Joelinton added another, pouncing on a rebound from a Wilson shot to score.

Paraguayan Almiron made it four in the 67th, taking a couple of touches before curling an exquisite left-foot shot in at the far post as Newcastle ran riot against a ragged Villa defence.

Wilson hit the bar with another header after 76 minutes and Jacob Murphy struck the post two minutes later as Newcastle ran out easy winners to remain fourth in the table on 24 points from 13 games, with Villa languishing in 15th on 12.