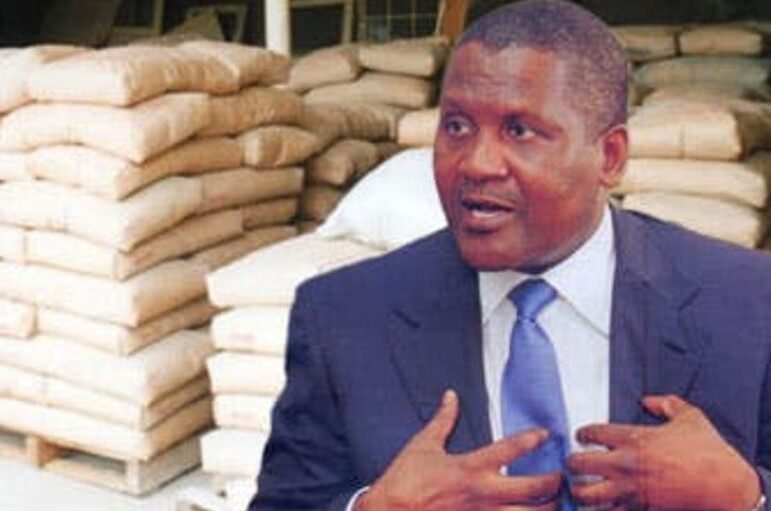 The management of Dangote Industries Limited (DIL) says it owns Obajana Cement plant 100 percent and its acquisition in 2002 followed due process.

Chronicle NG reports that the statement was in response to one issued by the Kogi State Government challenging Dangote to show proof of ownership of the plant.

“This is a statement issued for the sole purpose of addressing the concerns and apprehensions of the stakeholders of Dangote Cement Plc (DCP), especially the over 22,000 people it employs directly, and more indirectly, as well as thousands of contractors, wholesalers, users of our products, our financiers and shareholders.

“At a time of significant economic challenges that we face as a nation, we believe all must be done to keep our economy running effectively, our people employed, businesses that depend on us thriving, and not discourage those who take the risks of needed, lawful and significant investments in our economy.

“The shutdown of our plant has materially jeopardised the economic wellbeing of our country without any regard for its significant consequences,” said the statement.

The group said whilst reserving its rights to proceed to arbitration in accordance with the extant agreement, it had reported the unlawful invasion and the consequential adverse effects of same to all the relevant authorities, including the Federal Government of Nigeria who had intervened in the matter.

“It is hoped that the dispute resolution process we have initiated will quickly resolve the disputes and allow us to focus on our business without distraction and continue our significant contribution to our national economy,” the company said.

According to the group, the Obajana Cement Plant is one of the most critical components of economic activities in the nation, being one of the highest taxpayers, and vehicle for one of the largest companies invested in by thousands of Nigerian and foreign investors.

“Its most important assets are (1) its land, the plant and machinery thereon, and (2) the vast limestone deposit covered by mining leases issued under licence by the Federal Government of Nigeria (FGN),” it added.

The company said: “The land on which the Obajana Cement Plant is built was acquired solely by Dangote Industries Limited (DIL) in 2003, well after it had acquired the shares in Obajana Cement Company in 2002, following the legally binding agreement it entered into with KSG to invest in Kogi State.

“DIL was issued three Certificates of Occupancy in its name after payment of necessary fees and compensation to landowners.

“The plant and machinery were conceived, designed, procured, built, and paid for solely by DIL, again, well after it acquired the shares in Obajana Cement Company.

“The limestone and other minerals used by the Obajana Cement Plant, by the provisions of the Nigerian constitution belonged to the Federation, with authority only in the FGN and not the state in which the minerals are situated, to grant licences to extract and mine the resources.

“After the agreement with the KSG, DIL applied for and obtained mining leases over the said limestone from FGN, at its cost and has complied with the terms of the leases since inception.”

The company said the government of Kogi had no minerals to give, had no assets to give, and only invited DIL as most responsible governments do to come into the state and invest in a manner that will create employment, develop the state, and earn it taxes.

The company noted that in 1992, the Kogi government incorporated Obajana Cement PLC (OCP) as a public limited liability company.

“Sometime in early 2002, about 10 years after the incorporation of the OCP (which still had no assets or operations as of that time), KSG invited DIL to take the opportunity of the significant limestone deposit in the state by establishing a cement plant.

“Following several engagements and assessment of the viability of the proposed opportunity, DIL agreed that it would establish a cement plant in Kogi and provide the entirety of the substantial capital required for the investment.

“DIL also agreed, following a specific request by KSG, to use the OCP name (albeit only existing on paper as of that time, and without any assets or operations) for the time being, as the vehicle for this investment.

“On 30 July 2002, KSG and DIL entered into a binding agreement to document their understanding. The agreement was amended in 2003 and remains binding on, and legally enforceable by, the parties to same,” the statement said.

On the issue of an agreement between Dangote and Kogi government, the statement noted: “It was agreed, inter alia, that: DIL would establish a cement plant with a capacity of 3,500,000 metric tonnes per annum.

“That DIL shall hold 100 per cent of the shareholding in OCP, and source for all the funds required to develop the cement plant.

“KSG shall have the option to acquire five per cent equity shareholding in OCP within five years; and KSG shall grant tax relief and exemption from levies and other charges by KSG for a period of seven years from the date of commencement of production.”

It said consistent with the terms of the agreement, DIL sourced 100 per cent of the funds that was used to develop the plant without any contribution from KSG.

It said in line with its rights, ensuring alignment with the Dangote Brand, as part of internal restructuring and for better market recognition the name of OCP was changed to Dangote Cement Plc in 2010.

It added that a number of other significant cement companies (such as the Benue Cement Company) owned by DIL were merged with OCP to become the enlarged Dangote Cement Plc.

On the issues of execution of the agreement: “The Plant, Taxes, Shares and Dividends, DIL assiduously and at significant cost met all the terms of the agreement between it and KSG in relation to OCP. It built the cement factory, much bigger and better than envisaged.

“KSG could not meet its financial obligations of contributing to funding the plant in any form; neither could KSG fund acquisition of five per cent equity shares in OCP when it was asked on a number of occasions to exercise the purchase option.

“KSG also did not meet its obligations to grant waiver of taxes, charges and levies that it could charge the operations, affairs and activities of OCP.

“Rather, despite being entitled (under the terms of the agreement with KSG) to tax relief and exemption from charges and levies by KSG for a period of seven years from the date of commencement of production, OCP (and now DCP) has paid all due sub-sovereign taxes, levies and charges to KSG since it commenced production in 2007.

“KSG does not have any form of investment or equity stake in OCP, so no dividend or other economic and/or shareholding rights whatsoever could have accrued to it from the operations of the company.”

“DIL to the knowledge of KSG, paid substantive compensation to Obajana Farmland Owners located within the two (2) square kilometres of the plant site.

“Subsequently, in September 2004, DIL, in good faith, applied to the State Governor for the statutory consent for DIL to assign the plant site to OCP being DIL’s investment vehicle.

“This consent request was granted by the State Governor and the appropriate consent fees were paid by DIL.”

Shedding more light on the company’s engagement with Kogi government, the statement said that, “The investment of DIL in Kogi through OCP was at the instance of the duly constituted government of Kogi, done in accordance with the law of the state and all enabling laws in that regard.

“And the transaction documents were effectively, lawfully and duly executed by the Governor and Attorney General of the State (at the time), after internal approvals were obtained within the government.

“Since the inception of Alhaji Yahaya Bello’s administration in 2016, and regardless that government is a continuum, we have had series of enquiries about the ownership structure of the Dangote Cement PLC as it relates to the alleged interest of KSG; and had several engagements with the officers of the state government including Governor Yahaya Bello.

“At all of these engagements we have provided all the details and information supported by relevant documents, required by the government and the State House of Assembly to confirm our lawful investment,” continued the statement.

It further stated that in 2017, the company was invited by the Judicial Commission of Inquiry, and it made its submission to the commission with relevant documents to support its position.

“We are yet to receive any feedback from the Judicial Commission of Inquiry. While are still waiting to hear of the report of the Inquiry, we were invited by the State House of Assembly on the same matter earlier this year.

“And again, we provided evidence in support of our position that KSG does not have any equity or other interest in OCP or DCP.

“On Wednesday Oct. 5, hundreds of dangerously armed men, other than law enforcement officers, attacked our cement plant in Obajana, Kogi, destroyed our property, inflicted grievous injuries on many of our employees, and shutdown operations at the plant.

“Curiously, on Oct. 6, a day after the shutdown of our facility in Obajana on the orders of KSG, Governor Bello addressed the public and announced that a Specialised Technical Committee, which was set up as part of the recommendations of the Judicial Commission of Inquiry had just presented its recommendations, which have been accepted by KSG.

“This statement makes it abundantly clear that the shutdown of DCP’s plant occurred regardless of the Governor’s own confirmation that implementation of the recommendations of the Specialised Technical Committee was still pending,” the statement noted.

The company said the disruption of operations at the plant caused loss of revenue not only to the company and its customers but also adversely impacted revenue due to both the Federal and State governments.

How I killed Ataga, Chidinma confesses as court plays video