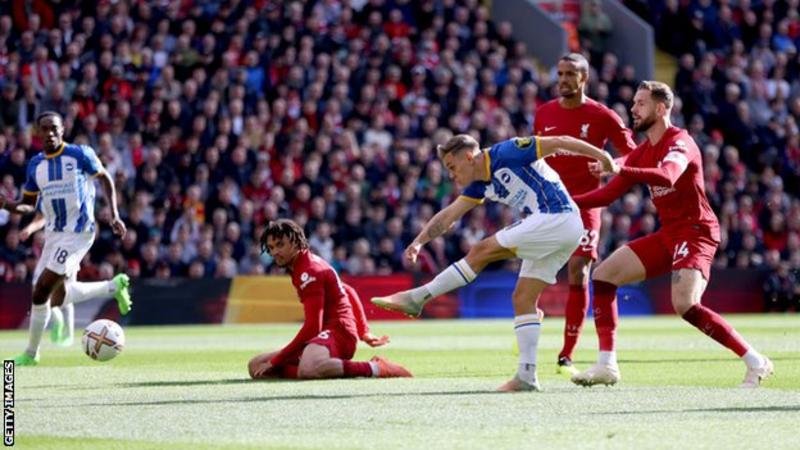 The Seagulls had raced into a two-goal lead with the Reds, playing their first Premier League game in 28 days after the international break, having made a sluggish start.

Trossard got the first after just four minutes when he thumped into the bottom corner from Danny Welbeck’s pass before adding a second in near identical fashion 13 minutes later, this time from Solly March’s ball.

Roberto Firmino started a Liverpool fightback before half-time when he drove in, with the goal given by the video assistant referee (VAR) after initially being ruled out for offside.

The Brazilian equalised nine minutes after the break when substitute Luis Diaz found Firmino, who coolly wrongfooted his marker before firing in from close range.

There was a sense of inevitability as a hungry Liverpool continued to come forward and they duly got a third when Adam Webster turned into his own net under pressure from Firmino.

But Trossard had the final say as he scooped in at the back post late on to secure the match ball and a point for his side.

The draw means Brighton remain fourth but Liverpool are ninth, 11 points behind leaders Arsenal but with one game in hand.

A stirring fightback, but Reds undone by another poor start

This was a game that arguably highlighted both the best and worst of this current Liverpool side.

On the one hand, their fightback was like the Liverpool of old where, after a dreadful first 25 minutes, there was the growing sense the Reds would get themselves ahead at some point.

But on the other hand, it was another poor start that ultimately cost them the three points.

Liverpool have now conceded the first goal in five of their seven Premier League games this season and working out how to get the Reds starting on the front foot once again is the challenge facing manager Jurgen Klopp at the moment.

The determination and character that took Liverpool to within a point of champions Manchester City last season is there but they need to rediscover their focus before the title race slips away from them.

Gallagher scores at Palace to save Potter’s blushes