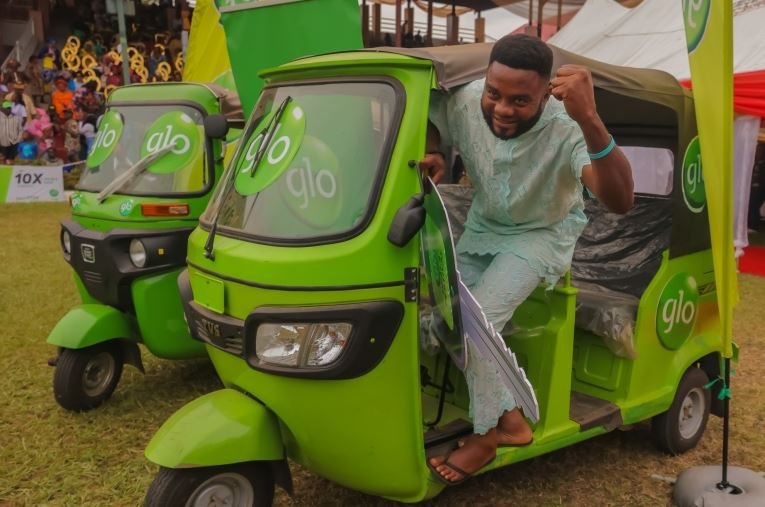 Thirty-seven-year-old Onitsha-based transporter, Kelvin Tochukwu, who won a tricycle (Keke) in the special promotion packaged by Globacom as part of its sponsorship of the 2022 Ofala Festival says it is “a dream come true”.

Tochukwu who was presented his prize by Glo officials and Palace Chiefs at Ime Obi (Obi’s Palace) in Onitsha, Anambra State, on Sunday told the audience that he had been praying to own a Keke to start his own transport business. He said that he had a dream a week ago that he won the vehicle in the Glo promo. “I believed that dream and proceeded to buy a handset from Glo to qualify for the promo. I told my family and friends that I would win and here I am today. I am a firm believer that one will achieve whatever one wants to achieve and works for it,” Tochukwu declared.

Chuka Augustine Amene, a 32-year-old civil servant with the Anambra State Ministry of Justice, also won a tricycle. It was a true case of “double blessing” for him as his wife had a baby girl earlier the same day. “It has been a wonderful day for my family. My joy knows no bounds. My wife just put to bed this morning. Indeed, my new baby has brought me this blessing. Her name is Chimamanda (My God will not fail). Thanks to Globacom for this special gift”, he stated.

Globacom also presented other prizes such as industrial sewing machines and grinding machines to other winners in the promotion.

She said the gift came at a very opportune moment for her as it would empower her to earn money to support herself in school.

You are economical with the truth, Oyo government tells Fashola