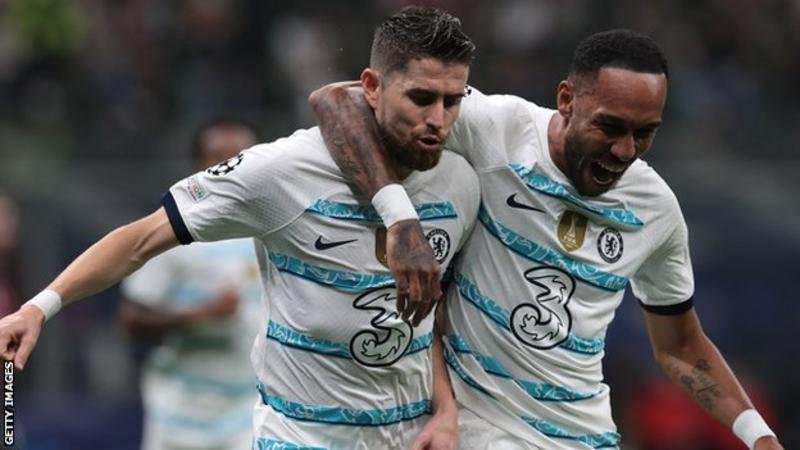 Tomori was sent off for pulling back Mason Mount in the area, with Jorginho converting the penalty.

Pierre-Emerick Aubameyang doubled the lead with a confident strike against his former club.

But Chelsea and England suffered a blow in the second half when right-back Reece James limped off.

It moves Chelsea top of Group E with seven points from four matches, but it remains extremely tight with Red Bull Salzburg on six points and both Milan and Dinamo Zagreb on four.

Bad night for Tomori and James

Tomori has not enjoyed his reunion with his boyhood club over the past couple of games – after Milan were beaten comprehensively at Stamford Bridge last week, the Chelsea youth product lasted just 18 minutes on Tuesday.

What looked like being a tight game was blown open when Tomori put his arm on the shoulder of England team-mate Mount, putting the midfielder off balance enough to send him tumbling to the floor.

Referee Daniel Siebert, who was central to the drama throughout to the ire of the home support, deemed it enough contact to be a penalty and that Tomori had not attempted to play the ball, thus overriding the double jeopardy rule and causing him to show the red card.

The decision was debated long and hard by Tomori and Milan’s players, but eventually he had to leave the field and after a lengthy delay Jorginho calmly slotted the penalty away.

Mount was excellent for the first 45 minutes before being substituted for Conor Gallagher at half-time, having picked up a booking for arguing with Olivier Giroud in the aftermath of the penalty.

Potter decided to remove Mount from the firing line of both the irate home fans and the card-happy Siebert – but not before the England midfielder caused Milan endless problems and showed why he is so admired by his managers for club and country.

While his form is a boost for Gareth Southgate, the sight of James hobbling off minutes after jarring his knee in the turf while making a challenge is worrying, with the World Cup less than six weeks away.

Having been so well stocked at right-back previously, Southgate is now sweating on the fitness of James as well as Kyle Walker and Trent Alexander-Arnold, who have all suffered injuries in recent weeks.

Four in a row for Potter

Only two players have started all five of Potter’s games in charge of Chelsea so far – goalkeeper Kepa Arrizabalaga and Mount.

The latter was central to the second goal too. He was played the ball on the edge of the Milan area by Jorginho, and cleverly laid it off first time. Both Raheem Sterling and Aubameyang were running on, and the former smartly moved out of the way for the latter to plant the ball beyond Ciprian Tatarusanu at his near post.

From then on it was fairly straightforward for Chelsea to earn only their second competitive win on Italian soil from 15 attempts, the last being a 4-0 victory for Claudio Ranieri’s side at Roberto Mancini’s Lazio in November 2003.

They came the closer of the two sides to scoring in the second half, with Gallagher hitting the side-netting after rounding Tatarusanu.

It is a fourth successive win for Potter, with Chelsea continuing an impressive turnaround by rising to the top of Group E after four games, having been bottom after matchday two.