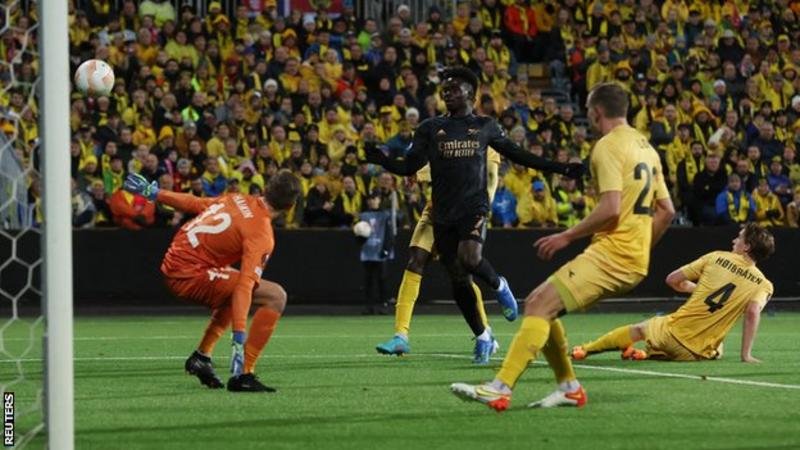 Bukayo Saka scored the only goal as Arsenal took a big step towards qualifying for the Europa League knockout stage with a slender win at Bodo/Glimt.

The winner came after Saka combined with impressive midfielder Albert Sambi Lokonga and his toe-poked effort hit a defender before ricocheting back off his chin and past the helpless goalkeeper.

Bodo/Glimt came into the game with a 14-game winning streak at home in Europe and they were spurred on by a boisterous crowd, but they were guilty of missing a number of clear-cut opportunities.

Amahl Pellegrino skewed wide when through on goal in the first half, while Runar Espejord placed over when eight yards out in the second.

It was far from vintage Arsenal on the artificial pitch in Norway, as shown by the fact they had to bring on Granit Xhaka and Gabriel Martinelli after an hour, but the result, combined with the fact he was able to rest key striker Gabriel Jesus and defender Gabriel, will delight manager Mikel Arteta.

The win leaves Arsenal five points clear of third-placed Bodo/Glimt, who have played a game more because the Gunners’ fixture against PSV Eindhoven last month was postponed owing to policing issues following the death of Queen Elizabeth II.

The rearranged match with second-placed PSV takes place next Thursday, when a win will guarantee Arsenal’s progression.

Saka was mightily impressive in the Gunners’ 3-2 win over Liverpool in the Premier League on Sunday and you could see the confidence flooding out of him in Norway.

He was lively from the start, getting in behind the Bodo/Glimt defence and firing across the six-yard box after two minutes but neither Eddie Nketiah nor Reiss Nelson gambled.

The 21-year-old continued to persist, though, and it was his driving run, rather than the relatively slow and patient build-up that had gone before, that cut open the hosts’ defence.

He got a huge slice of fortune with the deflection, but it was reward for his endeavour and once again highlighted his importance to this ever-improving Arsenal side.

There were five changes from last week’s 3-0 home win over the same opposition, and seven from the team that beat Liverpool, but the result and resolve they showed to keep Bodo/Glimt out in the second half is another example of the more gritty and disciplined side that is being moulded by Arteta.

Rob Holding made a key interception in the first half, while Lokonga completed 97% of his passes and made more interceptions than any other Gunners player.

With a potential Premier League title challenge on the cards, Arteta will be keen to get top spot wrapped up as early as possible so he can rotate players and avoid the extra play-off round in February.