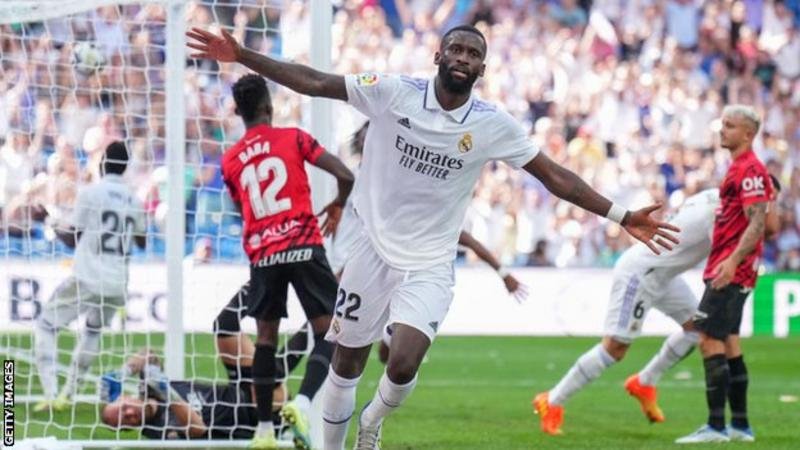 Real Madrid defender Antonio Rudiger has been cleared to play in El Clasico against Barcelona on Sunday but keeper Thibaut Courtois will miss out.

Rudiger needed 20 stitches in his forehead after colliding with Shakhtar Donetsk keeper Anatoliy Trubin while scoring in the 1-1 Champions League draw on Tuesday.

The German, who signed from Chelsea in June, will wear a protective face mask.

“If you look at him, he is so excited and looking forward to Sunday’s game.”

Belgium international Courtois will not be available for selection because of a lack of match practice following the back injury that has kept him out of Real’s past four matches.

“He is recovered and that’s great for us,” said Ancelotti. “But he needs more practice to get back to peak form. We won’t rush him back until he is ready.”

Real and Barcelona are level on points at the top of La Liga, although Barca are on the brink of being knocked out of the Champions League in the group stage for the second successive season, having won only one of their four matches in the competition.

Ancelotti says their poor form in Europe will not affect the game at the Bernabeu.

“Barcelona have won all their La Liga games except for their debut,” he said.

“They have had problems in the Champions League but it’s a different competition with a different outlook. In La Liga they have been extraordinary.

“We are going to enjoy ourselves. We want to win, but there is still a long way to go.”

‘I will not stop working and trying’

Barcelona manager Xavi says he would quit if he felt he could not improve the team.

“I know there’s a lot of pressure, a lot of criticism. This is Barca,” he said.

“I will not stop working and trying. The day that I’m not sure [of myself], I will leave. I will not be a problem for Barcelona, the day I see I am not a solution.”

Xavi, whose side won 4-0 at Real last season, says Barcelona are heading in the right direction despite their likely exit from the Champions League group stages.

“It’s a vital game for us, and for Madrid too. Let’s see who comes out of it as leaders,” he said.

“I think (our) project is under construction. The debacle in Europe is sad, but we are on a good path. We are having a splendid season in La Liga.

“We have made good signings. It’s too soon to draw conclusions. We have to keep working – I don’t know any other path towards success.”