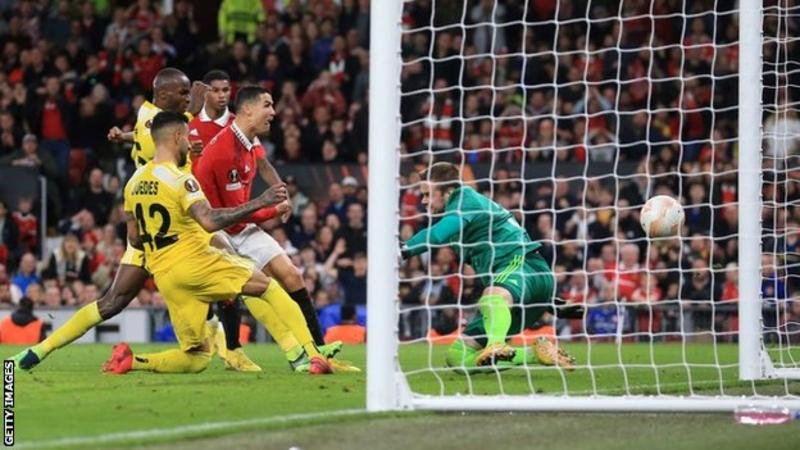 Cristiano Ronaldo marked his return to the Manchester United fold with his 701st career goal to seal a comfortable Europa League win over Sheriff Tiraspol at Old Trafford.

Dropped for last weekend’s trip to Chelsea as punishment for refusing to come on as a substitute against Tottenham eight days ago, it seemed as though Ronaldo was destined not to score after being handed a starting role by manager Erik ten Hag.

But with nine minutes left, the Portuguese great got his head to a Bruno Fernandes cross. Sheriff keeper Maxym Koval made a low save but as the ball spilled loose, Ronaldo pounced to complete United’s biggest win of the season and extend their unbeaten run to seven matches in all competitions.

It was a positive end to a difficult week for the five-time Ballon D’Or winner.

And for United, it set up a Europa League group decider with Real Sociedad in Spain next week, when the Premier League side must avenge their defeat on matchday one in order to top the group and avoid a play-off that could pit them against European heavyweights Barcelona, Juventus or Atletico Madrid.

Diogo Dalot put the hosts on their way to victory with a near-post header from Christian Eriksen’s corner a minute before the break.

Ronaldo eventually gets it right

Ronaldo’s goal was his 23rd in Europe for Manchester United

The problem with gauging any negative reaction to Ronaldo comes from the knowledge that when fans bellow his famous ‘Siuu’ celebration, it sounds very much like booing.

There was certainly a noise that wasn’t supportive cheering when the Portuguese’s name was read out just before kick-off and the best that could be said was that the reaction was mixed.

The truth is, at 37, Ronaldo has struggled to make an impact this season.

His best first-half opportunity came when Bruno Fernandes steered a header to him inside the six-yard box. Normally, the stabbed finish would have found the bottom corner. This time it went straight to goalkeeper Maxym Koval.

There was an audible gasp of expectation at the start of the second half, when Ronaldo stepped to his left as he has done so often in his career to make space for a shot from the edge of the area.

The entire stadium waited for the net to bulge. Instead the shot flew wide, to Ronaldo’s total disbelief. Shortly afterwards he did find the net with a volley, which was correctly ruled out for offside. Within seconds a supportive ‘Viva Ronaldo’ chant rolled round the ground.

It marked a turning point from the stadium. Ronaldo’s goal brought jubilation, even though the game was won. And the noise that came from the tunnel area as he made his way to the dressing rooms at the final whistle was very much a positive one.

It is almost two decades since Ronaldo first brought Old Trafford to its feet.

Now it is the turn of another 18-year-old to begin the process of developing from talented teenager to world class performer.

Alejandro Garnacho’s full debut was a proud moment for his family, who were in their seats in the directors box when the winger came out for the warm-up.

Madrid-born but called up by the full Argentina squad, Garnacho grew in confidence as the game went on.

He tried to set up Ronaldo in the first half, then cut in from the left flank repeatedly, eventually luring Renan Guedes into a rash tackle that brought the Brazilian a booking.

It is asking a lot for Garnacho to get anywhere near the levels Ronaldo has attained in his stellar career, but given they have spent £154m on Antony and Jadon Sancho in the last two summers, it would save United a considerable sum if the teenager can reach the standard Ten Hag is demanding.

The standing ovation the teenager received when he was replaced by Donny van de Beek 11 minutes from time was well deserved.

There was no chance for Old Trafford to react to Antony’s exit as he was substituted at half-time.

But, other than the goals, the Brazilian provided the most memorable moment when he performed a double spin with the ball at his feet – and no defenders close by – in one of his showboating exhibitions.