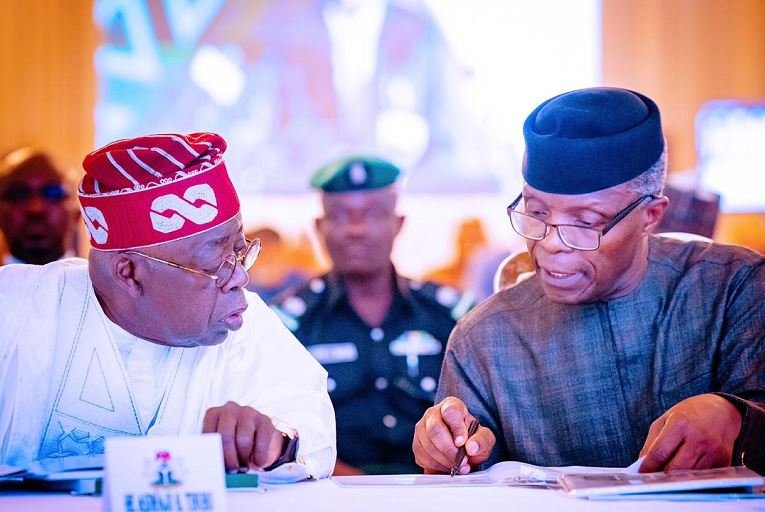 A political group in Nigeria has termed an ‘insult’ the comment made by Asiwaju Bola Tinubu, the APC presidential candidate, that he has forgiven Vice President Yemi Osinbajo.

The Osinbajo Support Movement on Thursday noted that while there is room for political realignment, any talk of forgiveness between the Osinbajo and Tinubu is an insult and a provocation that it will not take lying low.

In a statement by the group’s national coordinator, Mr. Liberty Badmus in Abuja, Nigeria’s capital, OSM said its attention has been called to a news report in Vanguard newspaper where a fellow and his co-travellers declared support for Bola Tinubu and begged for forgiveness.

OSM noted that the representation of the support group in question do not speak for the coalition of all Support Groups that rooted for the Vice President, Prof. Yemi Osinbajo in the buildup of APC presidential primary.

“While the OSM welcomes the need for the APC flagbearer and other presidential aspirants to come together, the group rejects the use of the word “forgiveness” and the implications attached to it.”

“We note just like the flagbearer stated that both the VP and himself have met at least twice since after the primaries, any attempt to take a revisionist perspective by insinuating that an offence had been committed because a sitting VP decided to run for the Office of President is an unmitigated insult, completely unnecessary and such narratives ought to be totally discouraged.”

“We recall that a meeting of APC Elders in the Southwest ahead of the primaries where the aspirants had resolved the issue concluding that all the aspirants had the right to contest. It is the spirit of that meeting that should be maintained not a derogatory effort which undercuts the solidarity required to take both the flagbearer and the aspirants including the VP forward.”

The group said support of everyone was appreciated and their new political choice is respected, but will not accept a situation where every group or individuals in the Vice President’s camp will be forced and classified into this self serving agenda.

“Everyone who supported the Vice President has the right to support whoever they wish after the primary, and Vice President Osinbajo has made it clear that people are free to support the party’s candidate but no one should however ridicule us and our principal by going to beg for forgiveness,” the statement added.

Badmus noted that, “Nigeria runs a democratic democracy, and approves anyone within the legal ambit of our laws (constitution of the Federal Republic of Nigeria and the APC constitution) to seek to be elected for President and other elective offices as so desired”.

“For the umpteenth time, we state that His Excellency, the Vice President has not committed any crime or offended anyone by seeking to serve his country in the capacity of President.”

“We wish to call on Tinubu to face his campaign and ignore elements who want to want to benefit from him by regularly invoking Osinbajo. Osinbajo has since moved on and he is vigorously facing the task of nation building for which he was elected Vice President”, Badmus said.