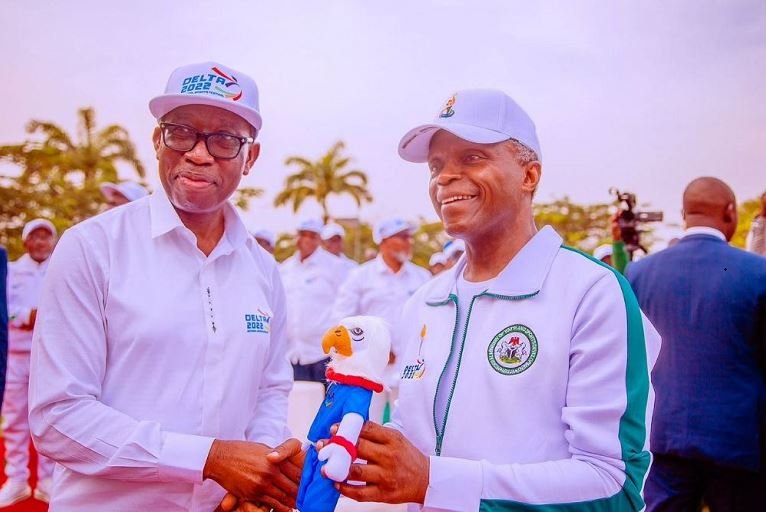 Vice President Yemi Osinbajo says going by the recent performances of Nigerian athletes at international competitions, it is obvious that the progressive agenda of the federal government in the sports sector is yielding desired results.

Prof. Osinbajo stated this Tuesday afternoon in Abuja at the flag-off ceremony for the movement of the ‘Torch of Unity’ for the 21st National Sports Festival scheduled to hold in Delta State in November 2022.

The Vice President said, “we are still basking in the euphoria of the outstanding performance of Team Nigeria at the just concluded Commonwealth Games in Birmingham, United Kingdom.

“The performance of Team Nigeria clearly demonstrates that the progressive agenda of the Federal Government for the sports sector is yielding the desired results.

“We are committed to rendering continuous support to the sports sector to sustain the heights already attained, as well as realise our overall goal of using sports as a veritable tool to meaningfully engage our teeming youth population,” the VP added.

Citing examples of successful Nigerian athletes discovered at previous editions of the festivals, Osinbajo said, “the National Sports Festival is a crucial activity in the sporting life of our country. It is the breeding ground and an engine room for the production of the very outstanding talents that will go on to become world champions.”

He recalled the exploits of some “great champions who were discovered at various National Sports Festivals, including Blessing Okagbare, a world medalist in the 200 metres; Olympic and World Championships Medalist in the Long Jump. Chioma Ajunwa, notable for being the first Nigerian to win Gold at the 1996 Summer Olympics in Atlanta and first black African woman to win an Olympic Gold medal in a field event.

Prof. Osinbajo noted that “Olusoji Adetokunbo Fasuba was the African record holder and gold medalist in the 100 metres event with 9.85 seconds, until Akani Simbine broke it in July 2021 with a time of 9.84 seconds.

“Lucy Ejike, a gold medalist and world record holder at the Paralympic Games (between 2000 and 2016, Ejike competed at five Paralympic Games, winning three golds and two silvers). And of course, the now legendary Tobi Amusan, the current World, Commonwealth and African champion in the 100m hurdles. She is also the record holder in the three competitions.”

Osinbajo then commended the Delta State government for accepting to host the event and for the efforts it was making in delivering a truly successful festival.

Earlier in his remarks, Delta State Governor, Dr. Ifeanyi Okowa noted the state’s preparedness to host athletes, officials and other guests to the 21st edition of the games.

He said sporting facilities and other relevant infrastructure for a successful festival would be in place before the opening ceremonies for the festival on November 28.

On his part, Minister of Youth and Sports Development, Sunday Dare, said the Ministry has made efforts to deliver a successful festival, assuring that more world champions will emerge from the 21st edition, tagged Delta 2022.

The highpoint of the event was the handing over of the festival torch tagged “torch of unity” to the Vice President by the Sports Minister, before the torch is taken on a symbolic journey across the country, until it reaches Delta State, where the games will be held.