Mbappe feels 'betrayed' by PSG and wants to leave
Advertisement 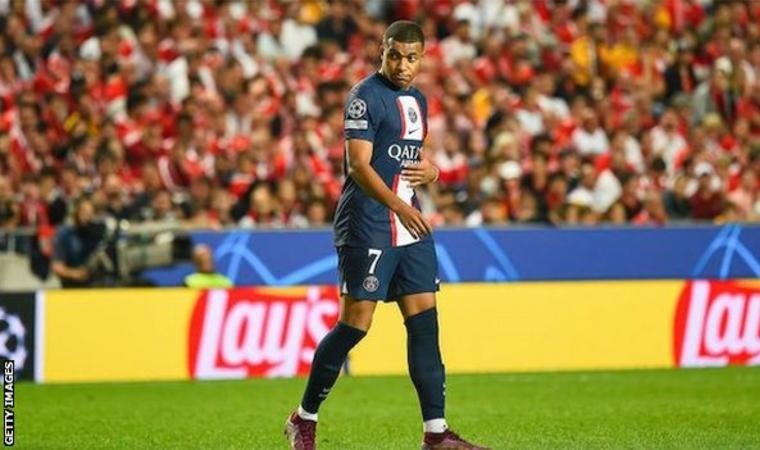 The France forward signed a new three-year deal in May but now feels he made a “mistake”.

Mbappe, who has scored 11 goals in all competitions for PSG this season, would prefer a move to Real Madrid.

But PSG’s sporting director Luis Campos says the 23-year-old has “never talked about leaving” the club in January.

Speaking to BBC Radio 5 Live, Laurens said: “He feels betrayed by the club in the sense that all the things the club promised him when he signed that new deal until 2025 have not happened.

“We knew there were tensions and now he has made his mind up and he doesn’t want to be there. He feels he made a mistake by extending his contract and he should have left in the summer, now he is looking at the January transfer window at where he could go.”

World Cup winner Mbappe has lifted 11 trophies at PSG, including four Ligue 1 titles, since joining from Monaco initially on loan in 2017.

On Friday, he topped the Forbes list for highest-earning footballers – the first time someone other than Lionel Messi or Cristiano Ronaldo has been number one for nine years.

“Clearly in his mind something is broken between him and the club,” Laurens added.

“Real Madrid were prepared to come in the summer and sign him as a free agent. They must still have the money to buy him and also for the wages.

“Would Chelsea come in for him? Would Manchester City? What about Manchester United under Erik ten Hag?

“It’s one thing he wants to leave but it’s another who can afford him and how much PSG want for him. PSG are now in a strong position. He may have to stay until the end of the season and then see what happens in the summer.”

“I am with Kylian Mbappe every day,” he told French TV station Canal Plus. “He has never talked to me about leaving in January.

“It’s not a statement from the player, it’s [from the press], and to have such information before a match like this is very serious. That’s why I’m here, to deny and say clearly that Kylian Mbappe has never spoken to me or to the president [Nasser Al-Khelaifi] to leave PSG in January.”

Campos added to RMC Sport: “Kylian is an extraordinary professional. For example, he played sick in the last match in Reims, he made the effort for the team. I see Kylian arriving with his team-mates, happy every day and with a huge desire to work.”

Atletico to sign Firmino, Martinelli insists on £200,000 a week