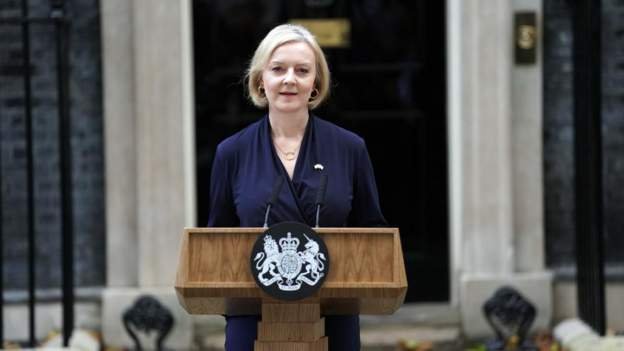 Liz Truss quit on Thursday after the shortest, most chaotic tenure of any British prime minister, forced out after her economic programme shattered the country’s reputation for financial stability and left many people poorer.

The Conservative Party, which holds a big majority in parliament and need not call a nationwide election for another two years, will now elect a new leader by Oct. 28 – Britain’s fifth prime minister in six years.

That contest is likely to pit ex-finance minister Rishi Sunak against Penny Mordaunt, but could also see the return of Boris Johnson, who was ousted as prime minister in July when his ministers resigned en masse to force him out of office.

The sight of yet another unpopular prime minister making a resignation speech in Downing Street – and the start of a new leadership race – underscores just how volatile British politics has become since the 2016 vote to leave the European Union.

Speaking outside the door of her Number 10 office, Truss accepted that she had lost the faith of her party and would step down next week. The pound rallied as she spoke.

“I have therefore spoken to His Majesty the King to notify him that I am resigning as leader of the Conservative Party,” said Truss, who was supported only by her husband with her aides and loyal ministers noticeably absent.

Allied leaders said they would continue to work with her successor and emphasised the importance of stability.

Truss was elected in September to lead the Conservative Party by its members, not the broader electorate, and with support from only around a third of the party’s lawmakers.

She had promised tax cuts funded by borrowing, deregulation and a sharp shift to the right on cultural and social issues.

But within weeks she was forced to sack her finance minister and closest political ally, Kwasi Kwarteng, and abandon almost all her economic programme after their plans for vast unfunded tax cuts crashed the pound and sent British borrowing costs and mortgage rates soaring.

Approval ratings for Truss and the Conservative Party collapsed.

On Wednesday she lost the second of the government’s four most senior ministers, faced laughter as she tried to defend her record to parliament and saw her lawmakers openly quarrel over policy, deepening the sense of chaos at Westminster.

With the economy heading into recession and inflation running at a 40-year high, millions of Britons are struggling with a cost-of-living crisis.

Hunt, who has ruled himself out of the leadership race, is due to deliver a new budget on Oct. 31 that is likely to cut spending on public services that are already showing clear signs of strain.

One senior Conservative lawmaker said Sunak and Mordaunt were willing to keep Hunt as their finance minister.