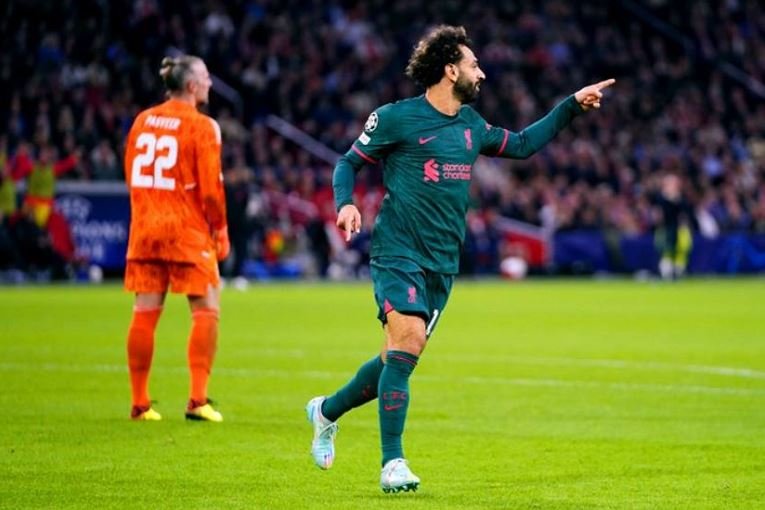 Liverpool put their domestic woes behind them by reaching the Champions League knockout stage with a clinical second-half display against Ajax in Amsterdam.

Needing a draw to reach the last 16, the Reds were fortunate not to be behind before Mohamed Salah clipped in with their only shot on target of the first half.

Darwin Nunez, back in the starting line-up after injury, should have doubled the lead before half-time but the £64m summer signing struck a post with an open goal in front of him.

However, the Uruguay forward quickly made amends by powering in a precise header from Andy Robertson’s corner shortly after the restart.

Moments later, England Under-21s midfielder Harvey Elliott added the third by latching on to Salah’s reverse pass and lashing into the roof of the net from a tight angle.

Liverpool knew a draw would be enough to clinch their spot in the last 16 for the sixth successive season.

But the comfortable victory means the Reds host Napoli in next week’s final round of group-stage fixtures safe in the knowledge their place is assured.

Liverpool’s inconsistent start to the season, epitomised by another disjointed performance in a shock 1-0 defeat at Nottingham Forest at the weekend, has frustrated their supporters and left some wondering about the direction of Jurgen Klopp’s side.

The prospect of a smooth passage to the Champions League knockout phase was far from certain after a heavy defeat by Napoli in their opening Group A game.

But their vast experience in Europe’s premier club competition, which they won in 2019 and finished runners-up last season, has eventually provided much-needed comfort and swiftly brushed away any early fears of not progressing.

Despite being far from their best in Amsterdam, particularly in the first half, Liverpool’s quality and know-how eventually shone through against the Dutch champions.

Things could have been much different had Ajax taken either of the two glorious chances which they spurned before Salah’s strike.

A slick move carved open the visitors in the third minute, only for Steven Berghuis to hit the post when he had time and space in the penalty box.

With Liverpool lacking cohesion and not managing a serious effort on the home goal, another clear-cut chance went begging when they piled forward on the counter-attack shortly after the half-hour mark.

Injuries to key players have not helped the Reds’ momentum this season, a point emphasised by Klopp in the build-up to the trip to Amsterdam.

Being able to welcome back Alexander-Arnold and skipper Jordan Henderson added a much-needed layer of experience at Johan Cruyff Arena, with Nunez offering a focal point in their attack.

Now Klopp’s task is to ensure his side can finally start stringing together convincing performances in the Premier League, starting with Saturday’s visit of a Leeds United side bereft of confidence.

Chelsea back for Dumfries, Arsenal line up £26m Danilo