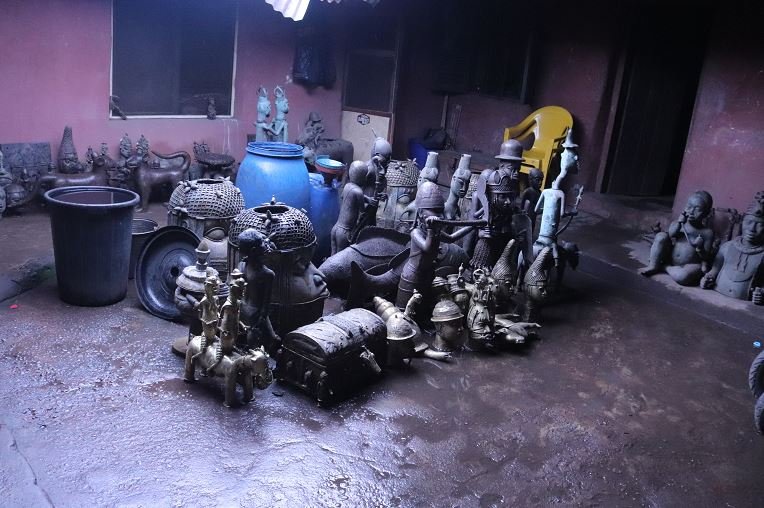 Most visitors to Holland, even those making a brief stop-over at Schiphol airport, almost always leave with a porcelain ceramic souvenir.

The favourite is usually a pair of blue and white clogs. Farmers favoured the clogs known as Klomps in Holland because they were made of wood, were light, and kept the feet warm when stuffed with straws. But many people who visit or pass through Holland today buy them as souvenirs and keepsakes.

Starting at about 1.95 euros, they are cheap, and folks with spare change can opt for ceramic plates or mugs, usually in the same blue and white design.

The blue and white design originated from the Chinese, who sold expensive porcelain wares which were in high demand in Holland in the 14th century. But only the rich could afford them. Then something happened in 1620, the Chinese Emperor died and supply was disrupted. Dutch ceramicists began copying the Chinese style to meet domestic demand, and so were born the famous blue and white sculptures popular in Holland and Denmark.

The style of pottery that produces these white and blue porcelain ceramics is called Delftware or Delft pottery. It is also sometimes referred to as Delft Blue, a portmanteau term that encompasses pottery items from clogs to plates, vases to figurines, and sundry ornaments and tiles.

One can tell a similar story about Igun street, home to the bronze makers of Benin City. While no one is sure when the practice of bronze-making began in ancient Bini, many trace it to the time of the Ogisos. Bronze works were made to capture and commemorate important occasions. Bronze makers also produced busts of royalty. They were, in that sense, a form of narrative photography.

That practice has been passed on from generation to generation, with the craft handed down from father to son, with a few families gaining prominence as master bronze makers, most of whom are descended from Inneh Nigun. Benin bronze makers belong to the royal guild and ply their trade within the Igun street precinct. Visitors to the enclave will have to pass through an archway decorated with the proclamation – Home of Guild of Benin Bronze Casters: World Heritage Site”.

Igun is short for Igun-Eronmwon, meaning “the place where bronze works are made” and the preferred bronze-making style is known as “the lost wax” process.

In antiquity, Benin bronze casters were allied to the palace and the palace held sway over how the works were produced and distributed. The guild, one of the 31 guilds of the Oba of Benin, is a secretive cult of craftsmen that allows no women. Their knowledge is not open to non-initiates. But this is in no way peculiar. In Holland, painters and sculptors who made the ceramics belonged to the Guild of St. Luke, while in England the Freemasons are believed to have evolved from the guilds of stonemasons and cathedral builders of the Middle Ages.

But something happened in 1897 to bring change. A punitive expedition led by Capt. Phillip Rawson, sacked the Benin kingdom, deposed the Oba, and plundered the palace leading to the pillaging and dispersal of thousands of royal artworks.

That was the beginning of the migration of Benin bronze works, in a manner of speaking, from the palace to the streets.

As knowledge of the aesthetically pleasing and very detailed artworks from Benin grew in European museums and especially during the Festival of Black Arts and Culture (FESTAC), which Nigeria hosted in 1977, tourists both white and black, began to throng Igun street to lay their hands on the bronzes produced there.

But the times have changed. The security situation in Nigeria has taken a toll, and visitors are not as plentiful as they used to be. So, the income of those who practice their craft at Igun street has taken a dip, but things are looking up.

A few days ago, the governor of Edo state, Godwin Obaseki while speaking at Alaghodaro Economic Summit Ltd/GTE an annual showcase of investment opportunities in Edo State announced the imminent take-off of the Benin Cultural District, an initiative with cultural tourism at its core.

According to media reports, when the Benin cultural district takes off, there will be three prominent museums in Benin City. “With the announcement of the state’s support for the Royal Benin Museum, Edo State will become one of the few states in Nigeria with multiple cultural infrastructures, including the Royal Benin Museum, the National Museum, and the Edo Museum of West African Arts (EMOWAA).”

While the Edo state government has refurbished the National Museum and the Edo Museum, the groundbreaking of the EMOWAA museum is imminent. The EMOWAA museum designed by award-winning architect, David Adjaye OBE who also designed the Smithsonian National Museum of African American History and Culture in Washington DC, will up the ante when it comes to cultural tourism in Benin city. Aside from providing a space where the best of contemporary West African art will be on display, it will also be a center for research and capacity building for young artists. There will be shops where visitors can buy bronze works, thus providing income for the artists.

EMOWAA is also leading the charge regarding archeological studies and the digitization of artworks for safe and sustainable storage and archiving.
But there is a nagging question, will three museums not be too much for Benin City? We can find an answer in world capitals like London, which has more than ten; Victoria and Albert, Tate Modern, London museum, British Museum, National History Museum, Imperial War Museum, Design museum and more. New York has over twenty from the Museum of Modern Arts, the Guggenheim to the Frick, The Metropolitan Museum of Art to the American Museum of Natural History and others. In Berlin, there are over ten museums from the Hamburger Bahnhof to the German Historical Museum, the Jewish Museum, the Bode Museum, and the DDR museum, amongst others.

The point to be made is that with the coming of the Royal Museum, National Museum, Edo Museum and EMOWAA, Benin City is about to stake its claim as a bonafide culture capital of the world.

Toni Kan is a Lagos based writer

2023: SERAP asks Atiku, Tinubu, Obi, others to publish sources of their campaign funding

Police confirm killing of officer by gunmen in Calabar