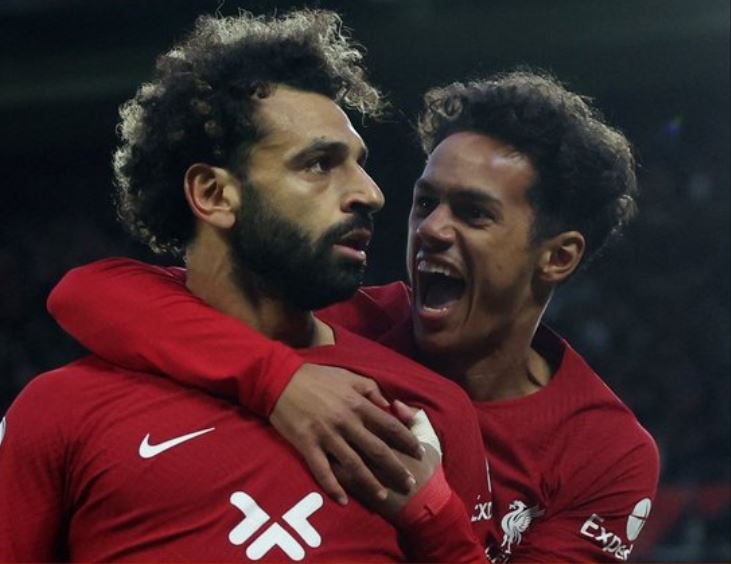 Liverpool put their Premier League struggles behind them to end Manchester City’s unbeaten run in an enthralling and hot-tempered encounter at Anfield, which saw Jurgen Klopp sent off.

City, fuelled by the goals of Erling Haaland, were in prime condition but Liverpool finally found the form which has deserted them for much of the season to overcome the reigning champions.

Haaland, for once, was not on the scoresheet and it was Liverpool’s talisman Mohamed Salah who made the vital contribution, racing on to a clearance from keeper Alisson after Joao Cancelo’s slip to beat Ederson with a composed finish with 14 minutes left.

Ederson had produced a brilliant save to deny Salah in a similar one-on-one situation while City manager Pep Guardiola was furious that a Phil Foden goal that would have put his side ahead was ruled out by the video assistant referee for Haaland’s foul on Fabinho.

This was not to be Haaland’s day, although he did bring two saves from Alisson, but Anfield was left exultant as Liverpool at last showed why they have consistently been City’s biggest threat.

In a frantic finale, tempers boiled over and Klopp was sent off by referee Anthony Taylor for his protests after he felt Salah was fouled – but when temperatures cool he will be overjoyed by a statement win.

The real Liverpool stands up

Liverpool went into this match with Manchester City in the rare position of underdogs at Anfield but, as so often in the past, they rose to the occasion in a thunderous atmosphere.

Klopp’s team were without key forward Luis Diaz and lost defender Ibrahima Konate to injury before the game, forcing 36-year-old James Milner into the right-back role with Joe Gomez in central defence alongside Virgil van Dijk.

Gomez showed why he is so highly regarded by Klopp with an outstanding display which kept out City’s previously all-powerful attack.

The game was settled by Salah’s moment of composure, once again aided by an assist from keeper Alisson. The Egyptian showed he is still Liverpool’s match-winner when he raced clear with Anfield expectant, and Ederson was unable to halt him on this occasion.

Liverpool’s false start to the season means they are off the pace in the title race with Klopp, who was shown a red card for vehement protests as tensions grew, already downplaying their chances.

However, they are still the team with the capacity to come closest to City at their best – although great credit must be given to the way Arsenal have set the pace in outstanding style.

Anfield was at its intimidating best once it became clear Liverpool were going to stand toe-to-toe with City, with other chances created apart from Salah’s winning goal.

Liverpool’s fans were in joyous mood at the end as they celebrated a victory they always relish.

Manchester City have been performing with ominous menace this season, with Haaland as the spearhead, and have looked unstoppable in attack, but in the Anfield cauldron their final flourish was missing and it condemned them to their first league defeat of the season.

The goal that decided the game was celebrated wildly, with justification, by Liverpool but City and Guardiola will be furious at the manner of its concession.

City wasted a free-kick which ended tamely in the arms of Alisson, whose clearance was missed by Cancelo as he slipped, leaving Salah, who scored a hat-trick in the 7-1 Champions League win at Rangers, to confirm he has rediscovered his best form with a trademark finish.

Guardiola, as so often at Anfield, was infuriated by a decision, this time when Foden’s goal was ruled out but when referee Taylor was called to the screen, it was clear Haaland had a piece of Fabinho’s shirt in the build-up.

City are too good, and have too many threats, to be knocked off their stride by one defeat but it is clear that losses to Liverpool cause them particularly acute pain.

Phil Foden thought he had put Manchester City ahead, but the goal was ruled out because of an earlier foul from Erling Haaland

Arsenal hold on to beat Leeds in nervy match