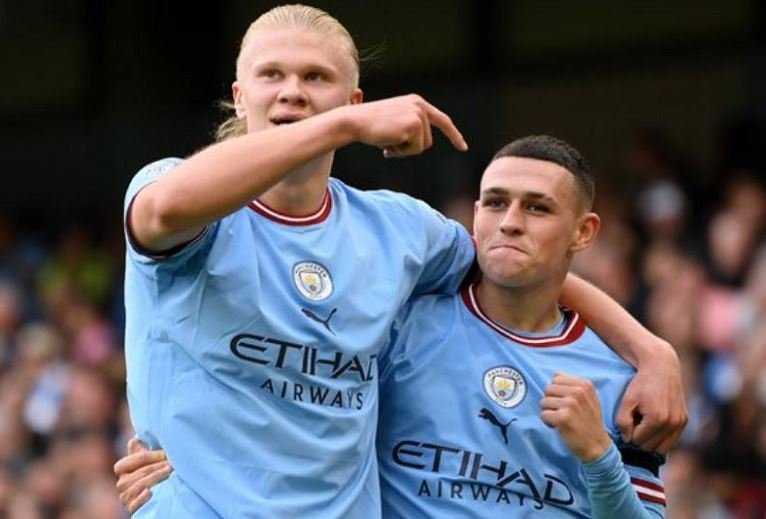 Haaland’s rampage this season continued as he made it 17 goals in 10 games since his move from Borussia Dortmund and Phil Foden also scored a treble as City closed the gap on pace-setters Arsenal to one point.

This was a brutal reality check for United after their recent improvement, as the reigning Premier League champions ran riot to illustrate the gulf in class between the teams.

City’s lightning start was rewarded when Foden swept home Bernardo Silva’s cross after eight minutes before Haaland inevitably joined the action with a header from a corner 11 minutes before half-time.

As United subsided, Haaland slid in a third from Kevin de Bruyne’s perfect pass then turned provider to set up a simple finish for Foden before the break.

United’s new signing Antony struck a superb goal from 25 yards to pull one back but it only provoked City to up the tempo again, Haaland thumping home his third from Sergio Gomez’s cross then again showing he can be creator by setting up Foden for City’s sixth.

Haaland’s third put him in the record books following hat-tricks at home to Nottingham Forest and Crystal Palace.

Anthony Martial’s late goal for United was greeted in near silence, as was his added-time penalty, on a day of embarrassment for United and manager Erik ten Hag and one of elation for City and Pep Guardiola.

Who can stop Man City and Haaland?

Arsenal are worthy Premier League leaders but this was a frightening display of firepower from the reigning champions as they confirmed their status as firm favourites to win a fifth title in six years.

City were clearly potent before the arrival of Haaland but he has put them on a different level, delivering the one thing they were arguably missing as he increases the ratio of chances they take with his ruthless finishing.

Add the creativity, and on this day the goals, from Foden plus the genius of De Bruyne and it is hard to see how they can be stopped, with Haaland also looking as if he could be the missing link that might finally bring the Champions League to the Etihad.

City blew United away as they started at lightning speed and went in 4-0 at half-time, referee Michael Oliver’s whistle for the break coming as a merciful release for United.

United’s goal poked City into action with Antony’s fine strike merely the catalyst for another onslaught, as Haaland scored the record-breaking third.

Manchester United arrived at the Etihad fuelled by the optimism of four successive league wins but were brought down to earth by their rampant neighbours.

United looked out of their depth within seconds of the start, surviving three goal-line clearances in the same incident before Foden set the tone for the afternoon when he flashed Silva’s cross past a helpless David de Gea.

Manager Ten Hag resisted the temptation to start with the experience of £70m signing from Real Madrid, Casemiro, as he stuck with Christian Eriksen, Scott McTominay and Bruno Fernandes in midfield.

It was a decision he may now regret as United were over-powered and over-run in all areas, unable to stem the tide and failing to cope with City’s creation and the awesome power and athleticism of Haaland.

The fact they scored more goals in the second half than City, including a beauty from new signing Antony, can hardly be labelled as a consolation as their recent upturn in results was put in perspective.

If anyone at United thought those better results in the last few weeks meant they were moving closer to City, this scoreline – which actually flattered them – put a stop to those notions.