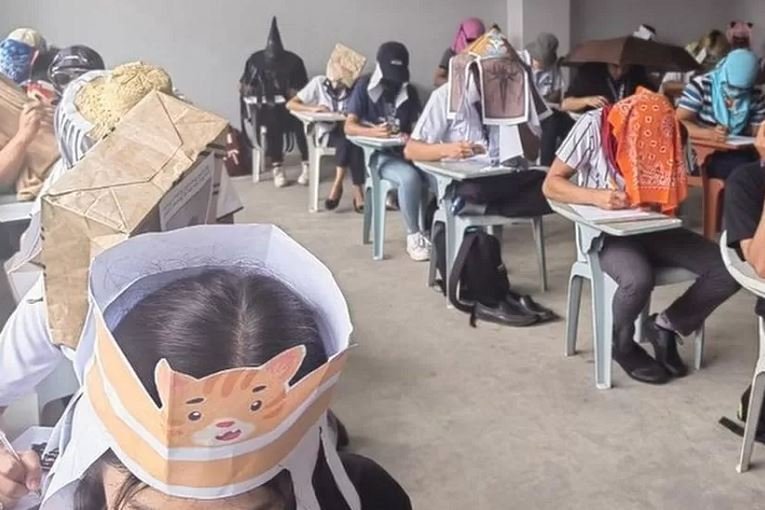 Students at one college in Legazpi City were asked to wear headgear that would prevent them peeking at others’ papers.

Many responded by creating homemade contraptions out of cardboard, egg boxes and other recycled materials.

Their tutor told the BBC she had been looking for a “fun way” to ensure “integrity and honesty” in her classes.

Mary Joy Mandane-Ortiz, a professor of mechanical engineering at Bicol University College of Engineering, said the idea had been “really effective”.

It was implemented for recent mid-term exams, which were sat by hundreds of students at the college in the third week of October.

Prof Mandane-Ortiz said her initial request had been for students to make a “simple” design out of paper.

She was inspired by a technique reportedly used in Thailand some years previously.

In 2013, an image went viral appearing to show a room of university students in Bangkok taking test papers while wearing “ear flaps” – sheets of paper stuck to either side of their head to obscure their vision.

Prof Mandane-Ortiz said her engineers-in-training took the idea and ran with it – in some cases innovating complex headgear in “just five minutes” with any junk they found lying around.

Others donned hats, helmets or Halloween masks to fulfil the brief.

A string of the professor’s Facebook posts – showing the youngsters wearing their elaborate creations – garnered thousands of likes in a matter of days, and attracted coverage from Filipino media outlets.

They also reportedly inspired schools and universities in other parts of the country to encourage their own students to put together anti-cheating headwear.

Prof Mandane-Ortiz said her tutees performed better this year, having been motivated by the strict examination conditions to study extra hard.

Many of them finished their tests early, she added – and nobody was caught cheating this year.