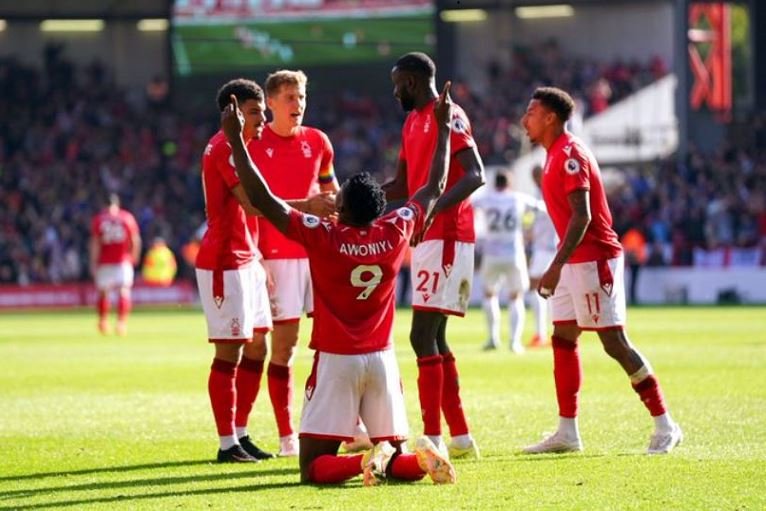 Nottingham Forest produced a superb performance to shock Liverpool and climb off the bottom of the Premier League at a boisterous City Ground.

Taiwo Awoniyi, who left Liverpool in 2021 without making a competitive appearance, hit the winner from close range after his initial attempt came back off a post.

Liverpool were a long way from their best – Virgil van Dijk wasted their best chance – and remain without an away league win this season.

Forest could have won by a more handsome margin, with Morgan Gibbs-White’s effort deflected over before substitute Brennan Johnson was denied by Liverpool keeper Alisson.

There were jubilant scenes on and off the pitch at the final whistle as Forest enjoyed their best day since returning to the top flight this season after a 23-year absence.

Forest have endured a difficult start to their first season back in the Premier League, but this was a day to remember as they thoroughly deserved their victory over a flat Liverpool.

Given Forest slumped to the bottom of the table on Thursday with Leicester’s win over Leeds, boss Steve Cooper will hope this is a season-changing win.

Despite their struggles since winning promotion, Forest awarded Cooper a new contract until 2025 this month.

While Bournemouth, Chelsea, Wolves and Aston Villa have sacked managers, Forest have decided to stay patient with theirs and have now secured four points from the past two games.

Forest took the game to Liverpool from the first whistle and, by the time referee Paul Tierney blew for full-time, they had run themselves into the ground.

They have got into a habit of conceding leads this season – most notably when they led Bournemouth 2-0 only to lose 3-2 – but survived some frantic late Liverpool pressure to secure a famous win.

Three of their next five league games are against Arsenal (away), Manchester United (away) and Chelsea (home), but this memorable win will give them confidence.

Questions will be asked of manager Jurgen Klopp about Liverpool’s poor display. It could have been worse for the visitors but Johnson hit a post in the closing moments with Alisson well off his line.

Liverpool looked to be getting back into some sort of rhythm with wins over Rangers in the Champions League followed by back-to-back Premier League victories over Manchester City and West Ham.

This, however, was a million miles away from the gripping victory over City six days ago.

Trent Alexander-Arnold went close to salvaging a point near the end, yet this was a sluggish performance before the trip to Amsterdam for the Champions League game with Ajax.

On a day when Liverpool’s season went backwards, Klopp will demand a much improved performance on Wednesday.