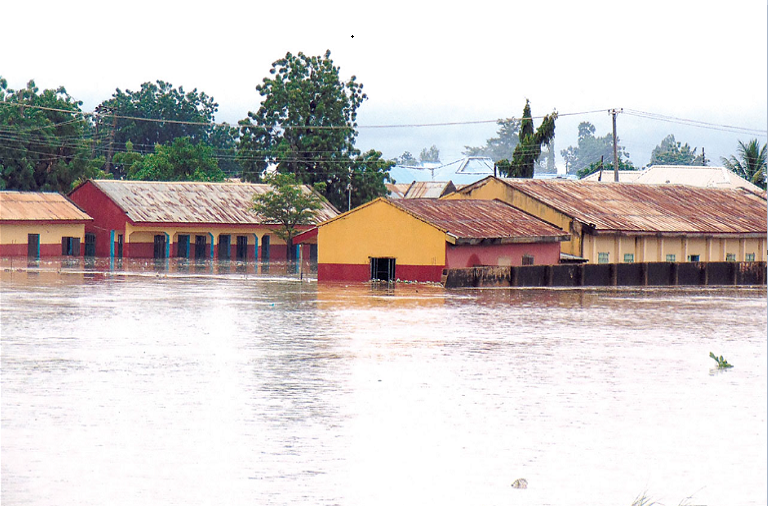 Flooding in Nigeria has killed over 500 people and has left more than 90,000 homeless, two government ministries said on Friday.

The floods have hit 27 of Nigeria’s 36 states and impacted around 1.4 million people, the ministries for humanitarian affairs and for disaster management said in an online posting.

Most of the people affected are without good shelter, electricity, food, and, fuel supplies.

Nigerian authorities said flooding caused by heavier than usual rains had been building since early summer and intensified after water releases from the Lagdo dam in neighbouring Cameroon.

“The scale of the disaster …is colossal,” Mustapha Ahmed, director general of the National Emergency Management Agency, added in a statement.

NEMA boss, Mustapha Ahmed is collaborating with the military to airlift trapped citizens

On Thursday, drone footage in Lokoja – which sits in the north-central Kogi state at the confluence of the Niger and Benue rivers and has suffered weeks of flooding – showed dozens of submerged homes and businesses.

“I have never seen such a thing,” resident Khalid Yahaya Othman told Reuters as he looked at his submerged fuel tanks and nearby waterlogged streets.

“When this water was coming, we never envisaged that it will come and over cover the tank,” he said

State oil company NNPC blamed the floods, which blocked a key road out of Lokoja, for a fuel shortage in the capital, Abuja.

Cameroonian power company Eneo said last month it would release water from the dam in September and October after its reservoir hit 91% capacity.