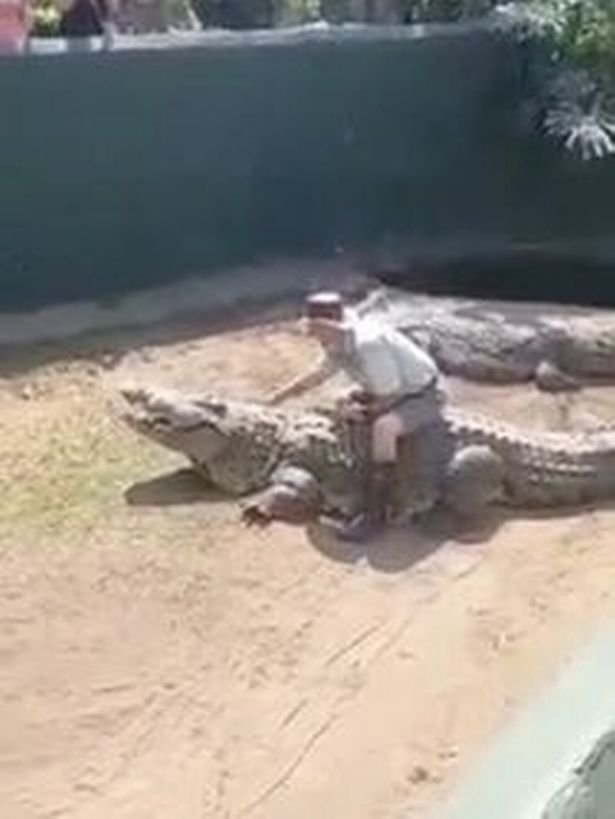 A zookeeper miraculously dodged death after a 16-foot crocodile launched an attack on him in front of horrified tourists.

Crocodile handler Sean Le Clus was ferociously attacked while sitting on the back of the 660kg beast before a second one also targeted him.

The 68-year-old endured a terrifying bite from the female crocodile name July, followed by a Nile crocodile called Hannibal at the Crocodile Creek farm in the KwaZulu Natal province of South Africa.

The handler, who has cared for Hannibal for more than 30 years, had to wriggle and push himself out of the beast’s five-inch long teeth, which sank into his thigh.

After twisting his body away, the croc hurled him onto the floor of the enclosure before he escaped on all fours.

Sean had just fed the female crocodile a chicken to keep her placated while he performed his “party trick” of sitting on Hannibal’s back for the crowd.

He calls the giant carnivore a “good boy” as he pats him just behind the head but does not notice the female called July suddenly arrowing towards him.

At the last moment, he pulls his leg out of the jaws of the female’s mouth and fends it off with a stick as he dismounts the huge male for safety.

But having taken his attention off Hannibal, the 103 stone predator sees his chance and whips his head round with its jaws wide open.

Sean, who has been bitten before by another crocodile and suffered a leg wound that left him limping for 11 months, leapt in a panic backwards.

He has said previously: ”If a croc gets a grip on you it is game over”.

Dozens of tourists screamed out in shock during the potentially lethal attack at the Creek tourist attraction in South Africa.

The popular reptile park on the Utongati River flood plain just north of Durban is home to 6000 crocodiles and alligators and snakes.

A Crocodile Creek spokesman told The South African newspaper: “Sean had two big teeth holes in him but sewed them up himself and was back at work in 20 minutes.

“It was the first time Hannibal has bitten a handler and it happened because the female moved in on him and she can be very stroppy.

“Sean was watching the female and Hannibal just reminded him that he was there – if it was a proper bite then it would have been very bad.