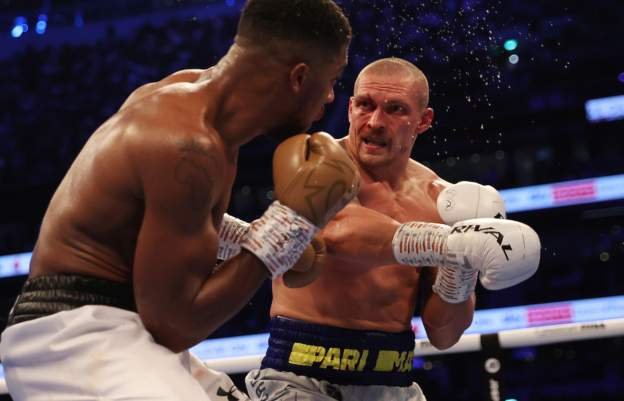 Oleksandr Usyk has offered to help prepare Anthony Joshua for his next fight potentially against Tyson Fury.

But he is open to coming to the UK to assist Joshua with his training.

Alexander Krassyuk, Usyk’s promoter, said: “He said if needed he might come and give him a couple of [pieces of] advice.”

Usyk outclassed Joshua in an upset last year to win the unified IBF, WBO and WBA championship. In a brave bid to try to reclaim his titles Joshua chose to trigger his rematch clause and boxed the Ukrainian a second time last month, only for Usyk to claim a points victory once again.

In the immediate aftermath of that fight, Usyk called for Tyson Fury to face him in an undisputed heavyweight title clash. It is the one fight Usyk wants but he will not be ready to box again until next year.

That opened the door for Fury, the WBC title holder, to fight Joshua in an all-British heavyweight clash.

Fury has offered Joshua the opportunity to challenge him and Joshua’s management team announced on Tuesday that they have accepted terms for that possible bout on December 3.

The Ukrainian’s team has now confirmed that Usyk would be willing to help Joshua prepare for his next fight, even though that could potentially be against Fury.

It would be a new situation for Joshua, although the Briton has previously trained with a future opponent.

When Wladimir Klitschko was heavyweight champion, Joshua joined him in camp to train and spar with him.

The two subsequently maintained cordial relations even after their memorable showdown at Wembley Stadium in 2017.

Joshua’s outburst after his most recent loss has been widely discussed but Usyk himself has not criticised him publicly.

“He was disappointed with his defeat and he was sad,” the champion has said.

“I understand that he wanted to win against me, but Anthony can’t give up. He must go forwards.”