The significance of Osinbajo’s “Debt for Climate Swaps” advocacy
Advertisement 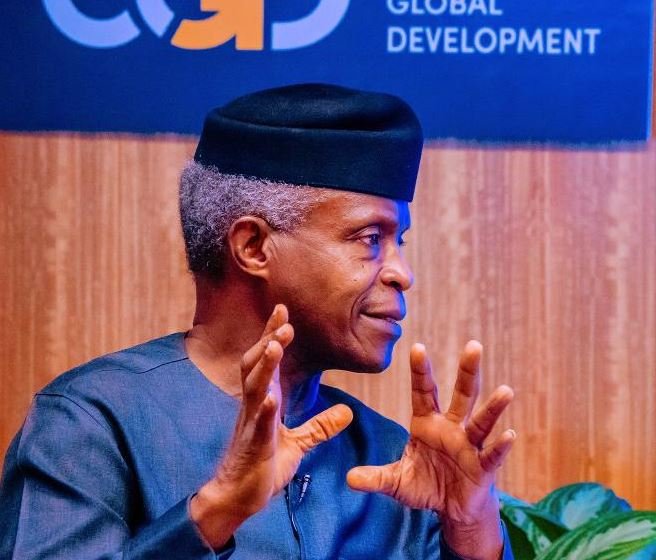 Explaining the DFC concept during a lecture on a just and equitable energy transition for Africa at the Center for Global Development in Washington D.C, Prof Osinbajo stated that “debt for climate swaps is a type of debt swap where bilateral or multilateral debt is forgiven by creditors in exchange for a commitment by the debtor to use the outstanding debt service payments for national climate action programs.”

Explaining further, he stated that “Typically, the creditor country or institution agrees to forgive part of a debt, if the debtor country would pay the avoided debt service payment in a local currency into an escrow or any other transparent fund and the funds must then be used for agreed climate projects in the debtor country.” Justifying the rationale behind such a debt swap deal, the Vice President submitted that the commitment to it would “increase the fiscal space for climate-related investments and reduce the debt burden for participating developing countries.”

The significance of Osinbajo’s advocacy can better be appreciated when one considers the fact that while Africa has contributed negligibly to the changing climate, with just about two to three percent of global emissions, it stands out disproportionately as the most vulnerable region in the world. This vulnerability is driven by the prevailing low levels of socioeconomic growth in the continent. While climate change is global, the poor are disproportionately vulnerable to its effects. This is because they lack the resources to afford goods and services which they need to buffer themselves and recover from the worst of the changing climate effects. This is the case in Africa and it should be of concern to all concerned global citizens.

The remarkable thing about Osinbajo’s novel idea is that the Debt for Climate Swap Deal is a win-win for both creditor/developed nations & Africa, especially as it gives room for the swap to count as a component of their Nationally Determined Contributions (NDCs). Informed stakeholders know that the NDCs are at the heart of the Paris Agreement and the achievement of these long-term goals on climate change. NDCs embody efforts by each country to reduce national emissions and adapt to the impacts of climate change.

The Paris Agreement requires each Party to prepare, communicate and maintain successive Nationally Determined Contributions (NDCs) that it intends to achieve. It also mandates Parties to pursue domestic mitigation measures, with the aim of achieving the objectives of such contributions. So, developed nations can adopt the Debt for Climate Swap Deal as a strategy for implementing their climate action commitments in a manner that meets leading socioeconomic priorities of The Paris Agreement. This will then “increase the fiscal space for climate-related investments and reduce the debt burden for participating developing countries.”

Osinbajo’s bold idea is a welcome development because it comes at a time when most African nations are finding it difficult to manage their rising debt burdens. Take Nigeria for an example, with a foreign debt profile that is about $40 billion, this idea could serve as a way out. If and when Osinbajo’s idea for a Debt-For-Climate Swap deal is widely accepted, the Federal Government would be reaping a huge debt relief from some creditors ranging in the order of billions of US dollars.

The VP also proposed a significant addition to conventional capital flows both from public and private sources to Africa through greater participation in the global carbon finance market. His words: “currently, direct carbon pricing systems through carbon taxes have largely been concentrated in high and middle-income countries. However, carbon markets can play a significant role in catalysing sustainable energy deployment by directing private capital into climate action, improving global energy security, providing diversified incentive structures, especially in developing countries, and providing an impetus for clean energy markets when the price economics looks less compelling – as is the case today.”

He encouraged developed countries to support “Africa to develop into a global supplier of carbon credits, ranging from bio-diversity to energy-based credits,” which would be a leap forward in aligning carbon pricing and related policy initiatives around achieving a just and equitable energy transition for Africa.

It is on this note that we must commend the VP for coming up with this novel idea which will bring debt relief and open up fiscal space in Nigeria at a time payments of debt services had become a real concern for Nigeria.