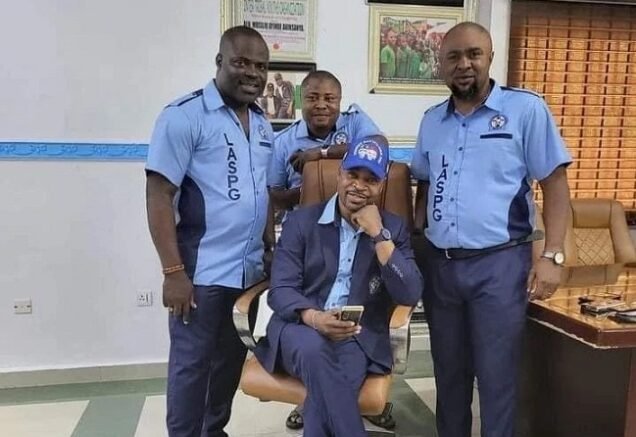 There have been series of mixed reactions all over social media since the unveiling of jackets and suits as the new uniform of motor park managers in Lagos state.

The Chairman of Parks and Garages Management Committee, Alhaji Musiliu Akinsanya (aka MC Oluomo) unveiled the new uniform on Thursday.

Meanwhile,  Nigerians took to online platforms to express their views and thought of the new uniform of the motor park managers in the state.

@saint_yce wrote, “Gang takeover completed when the new k**ngp*n has claimed his territory.”
@balogunkeeva tweeted, “What I know is agbero is better than cannibalism and terrorism

While @AAbudulateef wrote, “It can only be Lagos,” @terry_abiola wrote, “No matter how many suits and ties they wear they are still a t**t.”

One @Horlernreywerju described the Lagos motor park managers as “Agbero with class.”

@prodahood wrote, “They’ll want to stylishly rubbish this with their dirty mouth, but inside their heart they wish their state can be like Lagos.”

@CandOpetgas quizzed, “Park? You guys are just funny. Celebrating change of uniform. Some brains really need formatting and cleaning. Does changing uniforms add to the economy?” while @BishopDarey joked, “Lol. If you like to wrap sh*t with gold, sh*t na still sh*t. Lol.”

Recall that Akinsanya recently issued a warning to members of the agency against forming association with secret cults.

His warning came on the heels of the backdrop of the death of one of their officials, Sulaimon Lawal (aka Ariku), who was reportedly killed in a cult clash.

“I have said it on several occasions that our work is a noble one which requires people of good character. This will erase the wrong perception out there. Lawal’s case is unfortunate. It will make us look into screening our members more to flush out the bad eggs among us,” he said.

Akinsanya appealed to security agencies to investigate the incident thoroughly and punish the perpetrators in order to curb future occurrences.