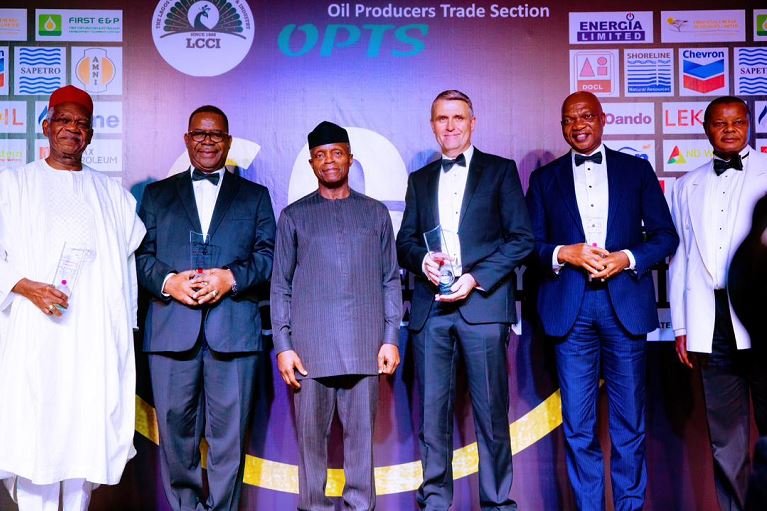 Vice President Yemi Osinbajo says more private sector participation in Nigeria’ transition to green energy is crucial as it would help the country achieve its objectives in the implementation of its Energy Transition Plan.

Prof. Osinbajo stated this on Thursday night in Lagos while delivering the keynote address at the 60th Anniversary Dinner of the Oil Producers Trade Section (OPTS) of the Lagos Chamber of Commerce and Industry (LCCI).

Speaking on the topic: “Nigeria: Transitioning to Green Energy”, the Vice President highlighted the Energy Transition Plan as “a comprehensive, data-driven and evidence-based plan, designed to deal with the twin crises of climate change and energy poverty.”

“We anchored the plan on key objectives, including lifting 100 million people out of poverty in a decade, driving economic growth, bringing modern energy services to the full population and managing the expected long-term job loss in the oil sector due to global decarbonization.

“The Private sector must up its participation in the transition to Green energy journey,” Prof. Osinbajo stated, adding that this includes “greater involvement in the crucial conversations about what an economically just transition to zero emissions should be,” he said.

Buttressing the need for more private sector participation in the Energy Transition Plan implementation, Osinbajo pointed out that the off-grid Solar space in Nigeria “is becoming one of the most exciting in the world.”

According to Prof. Osinbajo, “we have programmes such as the Federal Government of Nigeria’s Solar Power Naija (under its Economic Sustainability Plan), the Nigerian Electrification Programme with the World Bank Group and the African Development Bank, and also the Rural Electrification Fund providing almost $1 billion in financing and subsidies to drive 10 million connections. We are also working on clear guidelines for on-grid Solar before COP-27 to initially provide the structure for the rollout of at least 1,000MW.”

Adding that the private sector should also get involved in climate finance, especially the voluntary carbon markets, among others, Prof. Osinbajo urged the OPTS “to take the lead in Solar to help drive improvements in our energy mix and also accelerate the transition to having “energy” companies, not just oil companies.”

“We are particularly pleased with the good work that All-On and Konexa have been doing all with funding from Shell (a key OPTS member). We also have NNPC partnering with the Rural Electrification Agency to rollout Solar Mini-grids and Solar Home Systems across the country,” Osinbajo said.

Aside from the need for more private sector participation in Nigeria’s energy transition plan, the impact of climate change on the African continent, need to support fossil fuel projects in developing countries, and debt-for-climate swap deals were major highlights of the Vice President’s speech at the event.

Speaking further on the topic, Osinbajo noted that climate change may likely be the most consequential subject globally in the next few decades, even as the significance of reducing global emissions to zero come to the fore.

Restating the importance of using gas as a transition fuel for Nigeria and others developing countries, he highlighted six aspects in reducing global net emissions to zero, as it relates to the developing world.

He said, “Most countries, including Nigeria, agree that we must reduce global emissions to zero, in our case by 2060. We are major victims of the effects of climate change, but there are a few important issues that we have flagged to our wealthier brother-countries in the global north.

“The first is that we, in the developing world, are faced with two, not one crisis. One is climate change and the other is extreme poverty, the cause and consequence of which is energy poverty; or the fact that lack of access to electricity for millions is a cause of deepening poverty.

“The second is that African countries are the least emitters of carbon today – less than 1 percent of cumulative C02 emissions, and even if we triple electricity consumption in African countries (aside from South Africa) solely through the use of natural gas, this would add just 0.62% to global emissions. So, a lot of the flooding and adverse weather events that we are experiencing here are from emissions caused by the wealthier countries.

“The third is that the defunding of gas projects in order to force gas-rich countries like Nigeria to stop using gas and use renewables instead is faulty. These proposals to ban the funding of fossil fuel projects make no distinction between upstream oil and coal exploration; and gas power plants for grid balancing. Also, no economy in the world has been known to use renewables solely to industrialize. Solar power simply does not have the base load capacity yet for industry.

In addition, Osinbajo emphasized that stopping the use of gas could lead to deforestation and increase in pollutants.

“Stopping the use of gas means that we cannot use LPG for clean cooking stoves to replace the use of kerosene, firewood and charcoal, which are dirtier fuels that are widely used for cooking and other domestic purposes particularly in the rural areas. The use of firewood means deforestation, cutting down trees and, of course, desertification and then the loss of our carbon sinks,” he noted.

Faulting the double standards that wealthier countries have adopted on this issue (defunding of gas projects in developing countries), the VP noted that “in the wake of the energy crisis, many European nations have made recent announcements to increase or extend their use of coal-fired power generation through 2023 and potentially beyond.

“This is in violation of their climate commitments, and all analysis suggests that this will raise power sector emissions of the EU by 4%- a significant amount, given the high base denominator of EU emissions.”

Speaking further, Prof. Osinbajo emphasised that “the sixth and perhaps most crucial point is that we must take quick and informed actions in our national interest. We must take the threat of no investments in fossil fuels, including gas, seriously.”

“For example, many European and other global North countries are setting aggressive targets for use of electric vehicles and the banning of combustion engine vehicles. Soon, there may be only a few countries using combustion engines.

“It is also evident that while the Russia invasion of Ukrainian has shown the double standards in not allowing public funding for fossil fuel projects, the wealthier nations are still of the view that this is the correct policy and that, even if public funding is to be allowed, financing should not go beyond 2035.”

Also restating his advocacy for Debt-For-Climate swaps and greater participation in global carbon market for African nations, the VP said, “Given the escalating debt situations of many developing countries, including Nigeria, especially in the aftermath of C0VID-19 and the Russian-Ukrainian conflict, we should also bring Debt-For-Climate Swaps into the climate finance mix.”

Osinbajo then commended the OPTS “for its outstanding role in the growth and development of the oil and gas sector in Nigeria, and for the numerous social development projects undertaken by your members through the years.”

The event, which was attended by notable personalities in the Nigerian oil and gas industry, as well as the public and private sectors, also featured remarks from top government officials, NNPC Ltd, the executives of the Oil Producers Trade Section of the LCCI, among others.