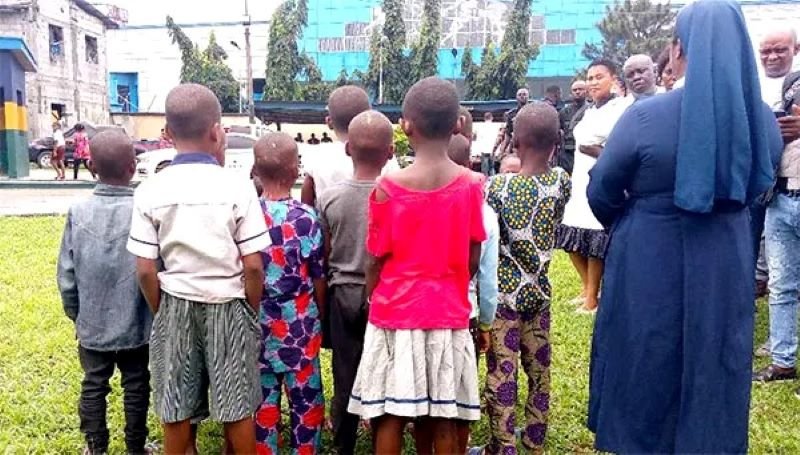 The Rivers State police have said its operatives rescued 15 children who were kidnapped within and outside the state and kept in the house of a fake Reverend Sister in Aluu, Ikwerre Local Government Area of the state.

The state Commissioner of Police, Friday Eboka, disclosed this in Port Harcourt at a news briefing to showcase some of the command’s achievements.

Eboka said the woman who claimed to be a reverend sister, Maureen Wechinwu, 44, was arrested and would be charged to court.

“A lady who claimed to be Rev. Sister Maureen Wechinwu was arrested. 15 children ranging from seven to nine years were rescued, case has been transferred to CP Monitoring Unit for discrete investigation.

“It took us over 24 hours before we could extract any information from the children. Some of them who could talk recounted their experiences with the woman”.

“One of them known as Prosper Godwin informed us that on October 31, 2020, he was abducted at Ikpazasia market in Bayelsa State, together with two others whom he did not know their whereabouts and was taken to the now apprehended suspects.”

According to the police commissioner, Godwin was later sold to a woman in Lagos.

However, on getting to Lagos, the woman who bought him realised that the boy was too sharp and returned him to the seller.

“That was how he managed to come back to that place (Aluu in Rivers)”, the CP said, when contacted the parents corroborated the statement of the child.

Some of the other children rescued are Queen Harry, Miracle John Ohiri,  Favour Edeze, Emeka Edeze, and Chimele Obinna.

Eboka further disclosed that of the 15 children, five of their parents have been contacted, while the police were yet to locate the parents of the remaining 10 children for identification.

“Investigation is ongoing with the view of arresting other suspects linked in the case,” he said.