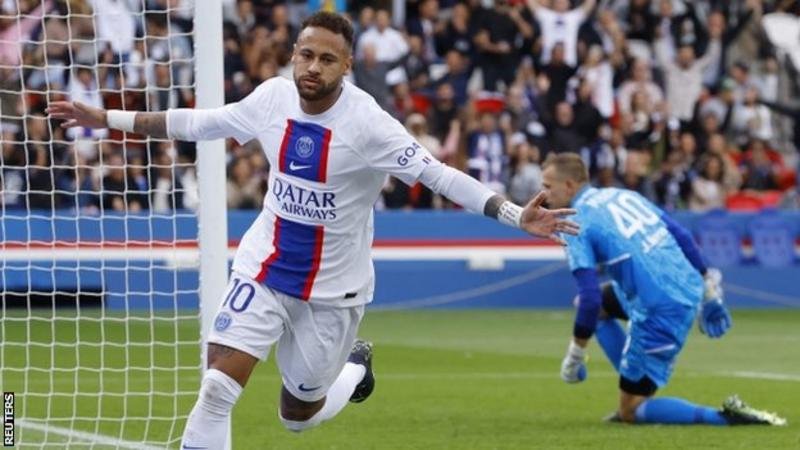 Brazil forward Neymar became Paris St-Germain’s fourth top-scorer of all time as the French champions held on for a narrow win at home to Brest.

The 30-year-old claimed his 110th goal to move in front of ex-Portugal striker Pauleta on PSG’s list of scorers.

PSG were unable to add to their lead and then Brest won a penalty on 70 minutes – but Gianluigi Donnarumma saved Islam Slimani’s tame spot-kick.

Victory sent unbeaten PSG back above Lens at the top of the Ligue 1 table.

Lens led Ligue 1 after winning 1-0 at home to Troyes on Friday, but Marseille will go level on points with PSG if they beat visitors Lille later on Saturday.

Lionel Messi chipped the ball forward for Neymar to score his eighth goal from seven Ligue 1 game this season.

The Brazil forward took a touch with his right foot before firing in with his left.

Zlatan Ibrahimovic is next on PSG’s all-time scorers list with 156, while Neymar’s team-mate Kylian Mbappe is second with 180.

Christophe Herelle was shown a red card for bringing down Neymar but the decision was overturned as a review showed the PSG forward was offside before the tackle.

Messi and Mbappe spurned chances either side of half-time and looked set to pay for the misses when Presnel Kimpembe committed the foul for the penalty.

However Donnarumma denied Slimani then made another diving save after a cross diverted goalwards off the Brest forward’s shoulder.