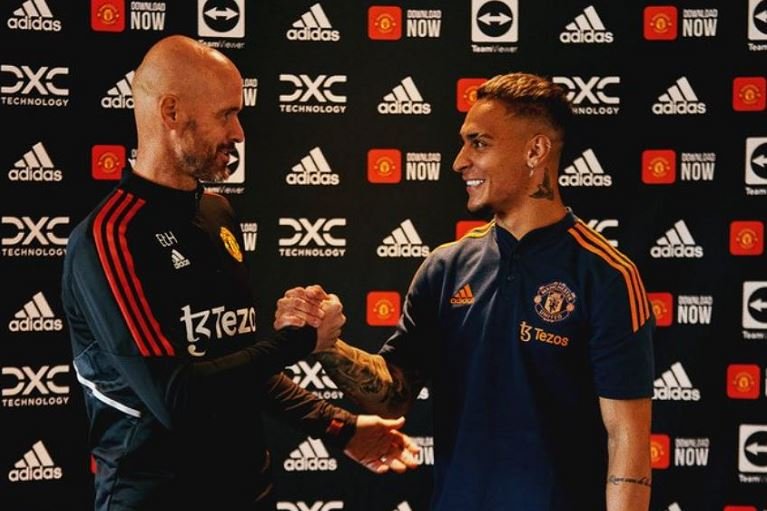 Manchester United have completed the signing Brazil winger Antony from Ajax for an initial fee of (£82m) days after a fee was agreed between both clubs.

The deal, which includes a potential 5m euros (£4.3m) of add-ons, is the fourth most expensive signing in Premier League history.

The 22-year-old has signed a contract until 2027, with the option of an additional year.

“This is an incredible moment in my career to join one of the most iconic clubs in the world,” said Antony.

It’s days like this that make us understand that it was all worth it, that every dream was never in vain!! Today I arrive at the biggest club in England, one of the biggest in the world and I just have to thank everyone who was part of this journey! (…) @ManUtd pic.twitter.com/2F94fPcOJd

“I’m thankful to everyone who has believed in me, especially my family, and all my coaches and team-mates, because I could not have got here without them.

“Playing under Erik ten Hag at Ajax was perfect for me and my development. His style of football and coaching brings out the best in me, and I am excited by what he has told me about his plans and ambitions in Manchester.”

Antony scored 24 goals and provided 22 assists in 82 appearances for Ajax. He joined the Dutch champions from Sao Paulo in 2020 and played under Ten Hag.

🤳 Straight from the heart. @Antony00 is a RED! 🔴#MUFC pic.twitter.com/wzRA7El4PD

Manchester United’s record transfer fee is £89m, which they paid out to sign Paul Pogba from Juventus in August 2016.

The attacker becomes United’s fifth signing of the summer, following the arrivals of his former Ajax team-mate and defender Lisandro Martinez, midfielder Casemiro from Real Madrid, full-back Tyrell Malacia from Feyenoord and playmaker Christian Eriksen on a free transfer.

United have spent more than £210m in this transfer window to back new boss Ten Hag, while several players such as Pogba, Jesse Lingard, Juan Mata, Nemanja Matic, Edinson Cavani and Andreas Pereira have left.