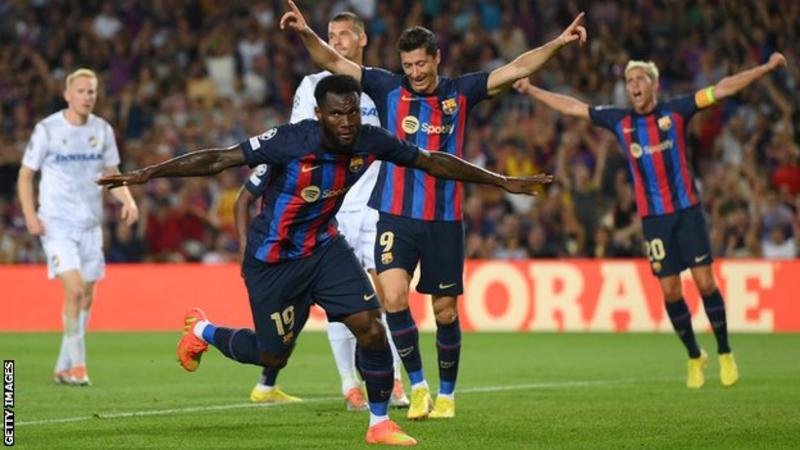 Robert Lewandowski scored a brilliant hat-trick as Barcelona eased to a win that was both expected and impressive in a game where Viktoria Plzen were blown away by their hosts’ creativity and speed.

Barca got off to a flying start and got the first goal on 13 minutes when Franck Kessie nodded home after Jules Kounde won first contact following a corner.

At that point, it looked like a case of how many, but when Jhon Mosquera spun Andreas Christensen and Christensen pulled him down, the ref pointed to the spot and drew his red card. But a look at VAR showed Christensen’s foul to have followed Mosquera’s elbow, so the decision was reversed.

Viktoria Plzen had briefly given their travelling fans from the Cech Republic something to cheer when Jan Sykora headed past Marc-Andre ter Stegen, but Barca – and Lewandowski – proved far too strong.

Shortly afterwards, a lovely finish from Lewandowski put Barca 2-0 up, and though Jan Sykora pulled one back for Plzen, Lewandowski headed his second and his team’s third in first-half injury-time, following great work from Ousmane Dembele.

You feared for Plzen when they emerged after the break, and sure enough, brilliant goals by Lewandowski and Torres, on as sub, put them further behind.

But that was last of the scoring, though you suspect there will be other teams who feel the force of Barca’s attack this season.

He has now scored 32 goals in his last 20 Champions League group stage matches.

Lewandowski joined Bayern on a free transfer in 2014 after his departure from Borussia Dortmund and scored 50 goals in 46 games last season as he helped Bayern win a 10th straight Bundesliga title.

He scored 344 times in 374 games for Bayern and is their second-highest scorer of all time behind Gerd Muller.