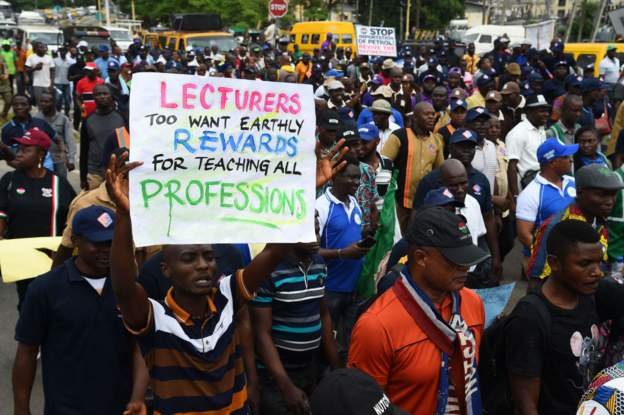 Public university lecturers have been on strike for seven months

ASUU and striking university lecturers say they will appeal against the order of an arbitration court directing them to suspend their seven-month strike and return to work.

The National Industrial Court gave the order on Wednesday while it considered a government’s suit challenging the strike.

But the Academic Staff Union of Universities said its lawyers were already filing an appeal and urged its members to “remain calm”.

The government approached the court to stop the lecturers from continuing their strike, after both parties failed to resolve their differences. It said the strike would result in irreparable damage to Nigerian students and to the country if not suspended.

For the past seven months, public university lecturers have suspended classes across the nation due to pay disagreements with the government.

The lecturers accused the government of failing to fulfil some of the agreements reached with the union 10 years ago.

The umbrella body of Nigerian university students, the National Association of Nigerian Students (NANS), had earlier welcomed the court order, describing it as a win-win situation for all the stakeholders in the matter.

The students’ union however urged the government not to see the ruling as a victory.

Court Order: We are waiting for our lawyers advice – ASUU