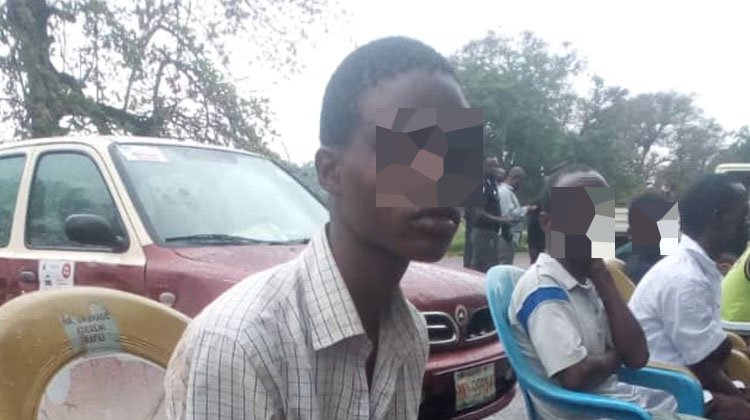 A 20-year old suspect, Tosin Kolade, who was arrested by the police for alleged rape and murder of a 17-year old girl, Ifeoluwa Apanpa inside the auditorium of a Pentecostal church at Olodo in Egbeda Local Government area of by the Oyo State.

The suspect, who was paraded on Tuesday told journalists that he lured the girl inside a church where he raped her and strangled her to death.

The victim was on her way to her church when the suspected rapist under a false pretence sought her assistance in his own church that was close by.

Kolade, in an interview with newsmen, said his mother is a member of the sanitation department in the Church, hence his access to the key of the church.

He said, “On 17th September 2022, I went back home around 1pm from work because we didn’t have work that day.  We were just sleeping at the shop, I told my boss that I wanted to go and ease myself, my boss allowed me and said I should come back quickly.

“I left home after picking the entrance key and left for church. My mother is a worker in the church and member of sanitation department. I pretended to be arranging the chairs of the church when I saw Ifeoluwa passing by. I sought for her assistance not knowing what was running in my mind and she obliged.

“I took out a knife from my pocket and I instructed her not to shout, I wanted to attack her to collect her phone but she dragged the knife with me and the knife fell, she also fell down and hit her head on the ground while trying to escape”.

“She became weak and I raped her, I took her phone and asked  her for the  password to her phone, she gave me wrong password, when I discovered that the password was wrong, I strangled her.”

The State Police Public Relations Officer, Adewale Osifeso, who corroborated Kolade’s narration said: “On Friday, 17/09/2022 at about 2030hrs, the Command through operatives attached to Iyana-Offa Divisional Police Headquarters were intimated about the sudden disappearance of Ifeoluwa, a 17-year old female who according to the report left for church at about 1600hrs and was yet to return home.

“A search party was immediately organized to demystify all possible angles to the disappearance, while this was ongoing as a call was placed to the parents of the deceased by an unknown caller stating clearly the deceased had been abducted.

“Preliminary investigation reveals that the lifeless body of the deceased who was later found beside a Bible School at Olodo area, with a bloody genitalia, coupled with signs of struggling might have been manhandled before her eventual untimely death.

“In addition to the above, the Command has in its custody through diligent technological driven intelligence and investigation one Kolade Tosin ‘m’ 20yrs who has voluntarily confessed to committing the sinister action.”

He said investigation was ongoing as the case is closely monitored by the state Criminal Investigation Department, CID, with the assurances of immediate updates as soon as it is concluded.

Gistlover accuses Remi Tinubu of affair with Gawat, raises alarm over his disappearance