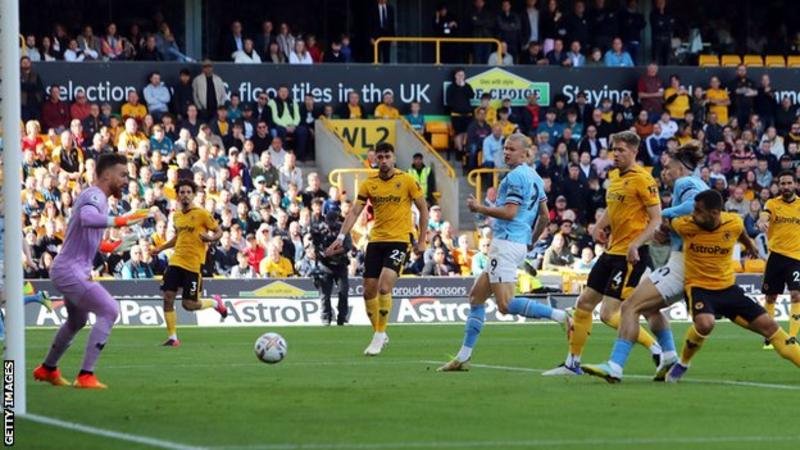 Erling Haaland continued his impressive scoring run as Manchester City went back to the top of the Premier League with a comfortable win against 10-man Wolves at Molineux.

The hosts had only touched the ball once before Jack Grealish put City in front after just 55 seconds.

Haaland scored for the seventh consecutive game and took his tally to 14 in the past nine when he doubled the visitors’ advantage with a long-range effort after 16 minutes.

A spirited Wolves continued to try and attack, even after Nathan Collins was sent off for a high first-half tackle on Grealish.

However, with Raul Jimenez missing through injury and new arrival Diego Costa not deemed fit enough for any involvement beyond meeting some fans before the game, they never looked likely to add to their paltry tally of three league goals.

By contrast, City have 23, with Phil Foden completing their victory by flicking home Kevin de Bruyne’s low cross midway through the second half.

Haaland had scored more goals on his own than 13 of City’s 19 Premier League rivals before kick-off – and by the end the visiting fans were singing “Erling Haaland has scored more than you” at Wolves supporters. The current tally is Haaland 11, Wolves three.

For context, when Mohamed Salah broke the record for goals in a 38-game season in 2017-18, he had found the net on four occasions after seven games.

Haaland’s latest effort was unusual in that he scored it from outside the penalty area.

Receiving possession inside the Wolves half, Haaland was allowed to turn and run before drilling a low shot past Jose Sa.

In doing so, he became the first player to score in their first four Premier League away games.

While there is too much time left in the season to make concrete judgements, on current evidence it is hard to see how Haaland, or champions City, can be stopped in terms of the title.

A tough task made impossible for Wolves

An already tough assignment for Wolves was made impossible after barely half an hour.

The game had barely started before Grealish scored. Although the former Aston Villa man was the subject of home fans’ ire after Collins’ dismissal, the blame lay squarely with the home defender, a £20m summer signing from Burnley.

Collins is still finding his feet at Molineux and a three-match ban that will rule the Welshman out of league matches against West Ham, Chelsea and Nottingham Forest will not help that process.

At least Collins knows what he is dealing with, though.

At one point in the first half, the midfielder lost possession near the halfway line, then chased after three City players who completed a neat triangle of passes and moved the ball out towards the touchline without Nunes getting near enough to make a tackle.