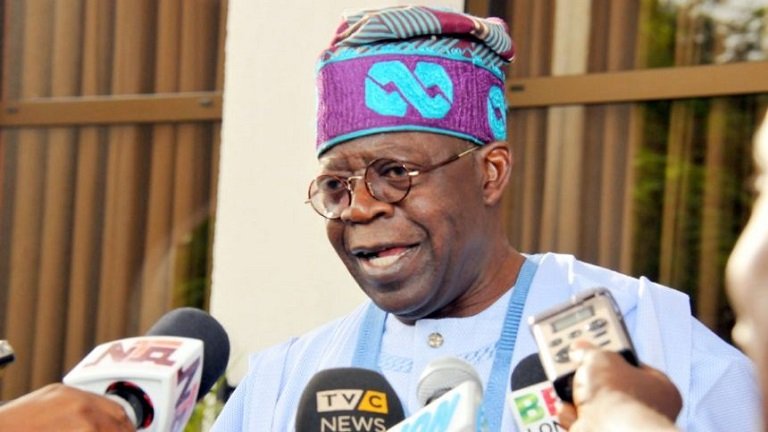 Social media blog, Gistlover, has exposed the real name of Bola Tinubu as Amoda Ogunlere, detailing how he stole the identity and how he became a drug don.

In a series of post on its social media page, Gistlover detailed the love life of Bola Tinubu, his relationship with his adopted mother, his early childhood and his path to the United States.

The blog also claimed that he runs a drug cartel and that he allegedly has blood on his hands.

Gistlover wrote: “Hello tueh tueh, GLB Nation, the most anticipated story is here, the real story of the Nigeria Pablo Escobar, if you are a film maker or storywriter, this might just serve as one story you don’t want to miss, everybody get your chair, popcorn and juice, it’s about to be a movie , Ema bami kalo (loosely translated as follow me).

Once upon a time , a boy was born on March 29, 1935 in a small town called iragbiji, Osun state to the family of Ogunlere, ambitious, bright but his parents were so poor, after giving birth to him, they left Iragbiji to Ibadan where he had his primary school education.

“While growing he was a smart and brilliant boy in class but stubborn, on different occasions his parent were summoned because it’s either he is in a gang fighting his classmate or he is missing school.

“Long story short, the bright boy finished his primary school was to be enrolled to junior secondary school, that was the last his parents heard of him. He made up his mind to go fend for himself in Lagos, those days, Lagos Island women were the real deal, so when he left Ibadan and headed straight to Lagos Island.

“It was there that he met a woman who was the then woman leader of the Awolowo Action group, a very rich and connected woman, her name is Abibatu Mogaji. The woman picked interest in him and took him in. He then began to working as the woman’s house help, he cleaned the house and did little little things in the house, although the woman had house helps in the house but she choose to just put Amoda through some test.

“She gave the boy series of loyalty test and he passed all without flinching, there and then she vowed to adopt the boy. Lest I forget, apart from been a successful business woman, Abibatu Mogaji was also one top drug dealers back in the day, if you were born in those days you will know drug barons were everywhere on Lagos Island, they still exist now but because of the media a lot of them are now coded.

Gistlover noted that, “The elder brother to Abibatu Mogaji had just lost his daughter whose name was Bola Tinubu. The girl was ill for a little period of time but then passed on, before her death, she was Bola Tinubu.

“Before the girl’s death, the father of the girl who is the famous Kafaru Tinubu and the brother the the famous Iyaloja, adopted mother of Tinubu, had planned on sending her to school in the USA, the whole process was done and intact before the girl died. As at that time, Abibatu Mogaji needed to test the capability of her newly recruited boy, so she talked to her brother who was a top police officer then, if there was a way, Amoda Ogunlere can use the deceased daughter’s traveling visa and document to travel to the USA, the only challenge they had then was the gender issue. The late Bola Tinubu was a girl, the new person who wants to take over her visa and name is a boy, it was not easy to achieve but with Abibatu’s connection and name back then they later succeeded and that was how a proper hardened drug baron was born.

The Iragbiji boy first operation went smoothly as he was super smart and daring those days, that was how Iragbiji boy entered the USA. Those days traveling was not hard as it is now, no stress at all, so he was shuffling Lagos and USA and was working hand in hand with Abibat and some famous drug lords in Lagos back then. Long story short, he met his first baby mama during this course and that one gave birth to his first son, Jide Tinubu (late). There were issues then as Abibatu Mogaji told Amoda point blank that having a family or child is not safe for their kind of business, that was how Amoda couldn’t build his first home because of the deadly job they were into. Long story short, he got another lady pregnant and that one gave birth to Folashade Tinubu-Ojo (current Iya Oloja). Gist dey on Folashade too but we will get there,” Gistlover added.

“The work was going smoothly and well those days been a drug baron was like been an hired killer, you need to be ruthless and be able to improvise, you need to be able to handle a gun well in case there were issues and a life needs to be cut short so there won’t be ‘yawa’ (problems).

“The work was going on smoothly and Amoda was getting promotions , then boom, on one of his flight from Lagos to USA, he met a beautiful air hostess, her name is Bunmi Oshonaike, they exchanged contact and their love story started, the rule was not to have a baby together just pure enjoyment, because as at that time, Bunmi Oshonaike was also a big fish, rolling with the high and mighty because of her type of job, she gets to meet people of class and calibre, so neither of them wanted the pregnancy.

“One thing led to another and that was how Bunmi got pregnant. It was such a hard blow on Amoda as he didn’t know how to tell his boss/adopted mother, so he suggested that Bunmi aborts the baby. Bunmi stood her ground that she won’t abort any baby, they eventually had the baby and named him Oluwaloseyi Eniyan Ko. The child of that day is now the famous Seyi Tinubu, not many know that Remi Tinubu is not the mother of Seyi Tinubu,” Gistlover said.

“As at the time of birthing Seyi, Tinubu had made a big name for himself in the drug industry, he started executing jobs himself and a lot of people he met in the industry were cleared back then (if you know you know) you can’t be a drug lord and attain a level without having multiple bloods on your neck. They can pass for hired assassins. Long story short, that was how Tinubu started running his own empire.

“Back then after trying to leave all his former boss and start his own proper drug empire, he had Issues in the US and he was almost busted. He had to run back to Nigeria for a while to lay low and during those periods he got a job with a oil and gas company as cover up but still ran his main business underneath. It was after he ran back to Nigeria he met a beautiful lady called Balikis Oluremi Odugbesan, this time around, Amoda was not serving any boss again so he has determined he was going to settle down with a woman since he is trying to lay low.

“He decided to use the period to quickly marry a woman properly as he already had three kids out of wedlock. Remi’s sister did the introduction and all things went well, their marriage produced three girls, Zainab Abisola Tinubu, Habibat Tinubu and Olayinka Tinubu is the last girl. Go to Telegram to see pictures, although they are trying to keep the last child picture off the media but I will sure get it soon, meet me on our Telegram page,” Gistlover assured, adding that, “This story is just starting as these are just brief introduction and not new to some people, main gist coming …

“So after getting married to Remi and God blessed them with three girls, many do not know they have children together and the rumour been peddled about is that Remi didn’t give birth to any child for Amoda, well it’s the cases of the kids that don’t make them flaunt them kids often. Yorubas will say, “Ile ta ba fi to mo, iri ni yi o wo” (A house built with saliva instead of blocks, will in no time be brought down by the dewdrops) such is the case of Zainab Tinubu a spoilt brat from the womb. It is not just Zainab, check most politicians children, you will understand better.

“Zainab started taking drugs at an early age and this damaged her a lot, even after purchasing lot of properties with drugs money for the kids and made them stay all their life in the UK, they still didn’t make Amoda proud, currently Zainab is in Bronzefield Prison in England. It happened that after taking her drugs as usual that day, she went on the street to assault a police officer in the UK and she was charged.

“The parent tried all they could just to make sure the matter was buried but it didn’t work, it was while in prison they noticed she had metal disorder and they had to transfer her to a mental home. As it is now, she shuffles both, now Amoda needed to restrategize because the police were already on his trail in the US, so he needed to find a way to establish his drug cartel in Nigeria without having any government issue . He devised a means to find his way to the top in politics in such a way that even if he kills anybody in Nigeria and they find the gun on him, he won’t be questioned.

“That was how he ventured into politics, but he made sure his cartel was running well, he needed to hand over and face politics squarely plus he spent a lot of money just to get key post in a short while and of course his target was to recover even more while on seat. This was how he met a young guy on the street of Apapa who was a freight agent, his name is Okonkwo Emeka…. Rings a bell right?? Emeka Money. E-Moneyyyyy, to be continued,” Gistlover said.

Nigerians not victims of targeted killings in Kenya – High Commission