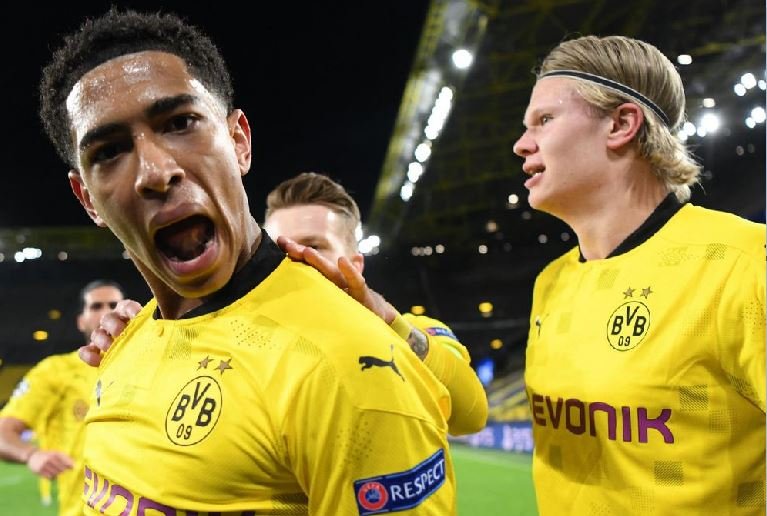 England and Borussia Dortmund midfielder Jude Bellingham, 19, who has been linked with a move to Liverpool, is Real Madrid’s top target for next summer’s transfer window. (Marca)

Liverpool could move for a swap deal involving Bellingham in January, with Guinean midfielder Naby Keita, 27, wanted by Dortmund. (Bild, via Express)

AC Milan technical director Paulo Maldini says Portugal forward Rafael Leao, 23, who has been linked with a move to Chelsea, knows his future is with the Serie A club despite complications from a previous transfer affecting negotiations to renew his contract at the San Siro. (CalcioMercato, via Mirror)

Chelsea are planning to increase the summer offer they made for Inter Milan’s Netherlands defender Denzel Dumfries to 50m euros (£44.5m), but would be willing to loan the 26-year-old back to the Serie A club for six months if the deal goes through in January. (Corriere dello Sport – in Italian)

Former PSV Eindhoven right-back Dumfries says reported interest from Chelsea and Manchester United “flatters me” but is focused on regaining the Serie A title with Inter. (De Telegraaf, via Express)

Chelsea, Arsenal and Tottenham are looking into the possibility of signing 25-year-old Spain and Villarreal centre back Pau Torres. (Caught Offside)

Inter Milan have not made any progress in talks over an extension for Milan Skriniar, whose contract expires next summer, so Paris St-Germain could make another move for the Slovakia defender, 27, in the winter transfer window. (La Gazzetta dello Sport – in Italian)

Asensio has already signed a preliminary contract with Real’s arch-rivals Barcelona that will run for four years from next summer. (RAC1, via Bild)

Barcelona and Liverpool are interested in swapping forwards, with the Netherlands’ former Manchester United attacker Memphis Depay, 28, heading to Anfield and Brazil’s Roberto Firmino, 30, replacing him at the Nou Camp. (Sport)

Liverpool are not ruling out a move for Benfica’s Argentina midfielder Enzo Fernandez, 21, who has a reported 120m euros (£106.5m) release clause in his contract. (O Jogo via Liverpool Echo)

Belgium defender Jason Denayer, 27, who was linked with Wolves this summer, has joined UAE side Shabab Al-Ahli on a one-year deal after leaving Lyon at the end of last season. (L’Equipe – in French)

Sadio Mane’s Senegal compatriot Salif Diao says the 30-year-old Bayern Munich forward pushed for his summer move from Liverpool because he “did not have the love that he needed” from manager Jurgen Klopp. (Liverpool Echo)

Middlesbrough’s English boss Chris Wilder, 55, is a leading candidate for the vacant job at Championship rivals Bournemouth having previously led Sheffield United to promotion to the Premier League. (Mail)

Fury says Joshua fight is off as no contract signed