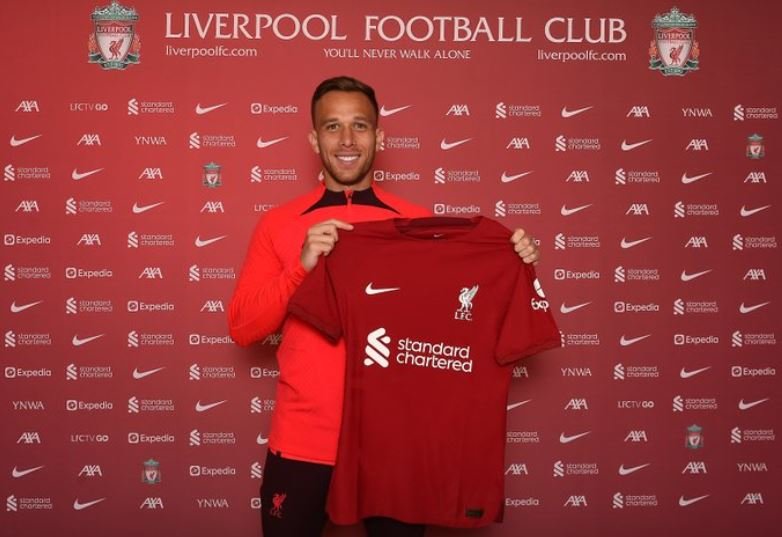 Touted as one of Brazil’s great prospects, Arthur Melo has since lost some of his “magic”, but a move to Liverpool could kickstart his career and solve the Reds’ midfield dilemma.

The 26-year-old arrives at Anfield on a season-long loan from Juventus to ease the Premier League club’s growing injury concerns, with Jordan Henderson, Thiago Alcantara, Naby Keita and Alex Oxlade-Chamberlain all currently absent.

Manager Jurgen Klopp hoped to bring in a new midfielder this window and said the one he wanted got away, as Aurelien Tchouameni joined Real Madrid in a deal reportedly worth up to £86m.

Liverpool have also been repeatedly linked with a move for Borussia Dortmund’s England international Jude Bellingham next summer, and Klopp has said he “would like to risk a bit more” in the market, but the Reds have a careful transfer strategy.

Some less obvious deals have turned into hugely successful signings and since 2015, when Klopp arrived, Liverpool have the lowest net spend of the perceived big six – a £744m outlay in that period has been offset by £493m in player sales, according to football data website Transfermarkt.

It means a loan move for Arthur may prove the ideal stopgap, though the Brazilian will also be a valuable asset if he can deliver on his potential.

“Arthur Melo is seen in Brazil as a player of enormous potential, who left Gremio as one of the best in the country between 2017 and 2018,” Brazilian journalist Jorge Natan tells BBC Sport.

“His arrival at Barcelona generated the expectation that he could become one of the main athletes of the Brazilian national team in the coming years for his versatility as a midfielder – very skilful with the ball, with great passing ability, as is required of great midfielders today.

“But his arrival in Europe seems to have taken some of the magic around his talent.”

Arthur Melo, handed his Gremio debut as an 18-year-old by Luiz Felipe Scolari, was courted by several European clubs before joining Barcelona in 2018, and played 72 times in all competitions during his two seasons with the Catalan giants.

“I used to accuse Arthur Melo of being a little conservative in the way he approached his football at Barcelona,” says Spanish football expert Guillem Balague.

“But this wasn’t all his fault – it wasn’t a Barcelona that moved a lot without the ball. Often, Arthur Melo just gave conservative passes, not so many through passes that he was there for.”

Juventus paid almost £70m to sign him in 2020 in what was essentially a swap deal for Miralem Pjanic, only for the Serie A side to go through three managers since his arrival – Maurizio Sarri, Andrea Pirlo and Massimiliano Allegri.

“With that style he [Sarri] plays – high tempo, midfielders that are very physical, it just didn’t work for him,” adds Balague.

“Then Pirlo started playing him, he did well and there were a couple of games where he was the one with the most accurate passing and certainly it suited what Pirlo wanted to do – and then Pirlo went.”

This also coincided with a series of injuries that, according to Transfermarkt, have seen him miss 23 games since December 2020, and Natan says he is unlikely to feature in Tite’s World Cup squad, come November.

“Physical problems and club changes stopped his development and took away his space in the Brazil team,” explains the Globo journalist.

“I believe that the opportunity to play in the Premier League and join a consolidated team like Liverpool can help him achieve at least part of the potential he showed four or five years ago at Gremio.”

Balague agrees, although he has reservations over how quickly Arthur Melo can adapt to the pace of the Premier League, which he says is “completely different to Serie A”.

“At Juventus, it didn’t really work because the system of Allegri and the style of Allegri just didn’t suit him,” says Balague. “But he feels not only now that he is 100% physically well, he feels he could adapt to the Premier League quickly.

“He reckons Klopp will understand his game much better than Allegri, so the player is really looking forward to coming to Liverpool.”

He joins a successful Brazilian contingent at Anfield that also includes Alisson, Fabinho and Roberto Firmino.

“Arthur will have to think quicker, manage to see the passes quicker and deliver them as well,” says Balague.

“I am not sure if he will have an immediate impact. If he gets to grips in a couple of months, you will see somebody who will deliver good balls to the forwards.

“Thiago’s football took a while to take off, but as we know he made a big impact. [It is] original thinking from Liverpool to get him and a good addition to the midfield.”