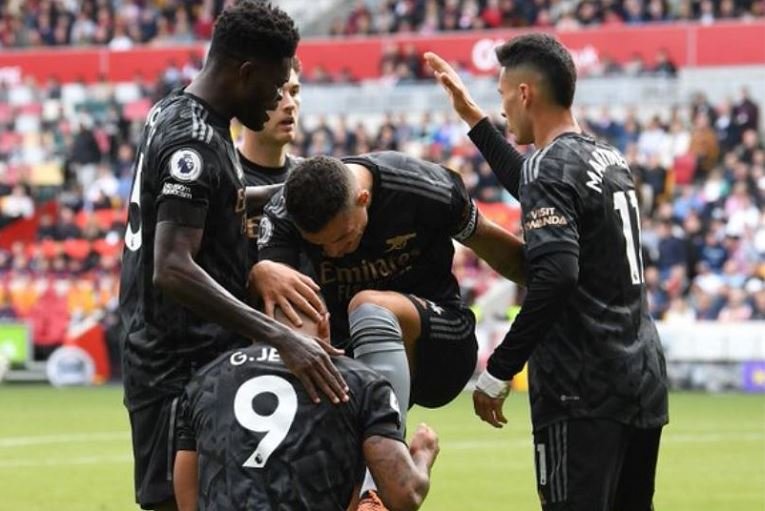 Arsenal’s Ethan Nwaneri became the youngest ever Premier League player at 15 years and 181 days as he made his debut in a 3-0 win over Brentford.

Mikel Arteta sent on the schoolboy midfielder in the closing moments with his side leading to return to the top of the league.

William Saliba set Arsenal on their way to a sixth win in seven top-flight games this season after the France defender climbed high to head Bukayo Saka’s corner in off the post.

It was 2-0 inside the opening half an hour as Brazil forward Jesus, a £45m signing from Manchester City in July, headed Granit Xhaka’s measured chip past David Raya.

Portuguese midfielder Fabio Vieira capped a dominant Arsenal display by marking his first Premier League start since joining from Porto with a goal from 25 yards.

Brentford were unbeaten in their previous three games and could have climbed to fifth in the table with a win, but they rarely threatened as forward Ivan Toney, who has been called up by England for the first time, struggled for service.

A special moment for one of our own…

Arsenal had started the weekend top of the table but dropped to third after Manchester City and Tottenham won on Saturday.

This win, however, put the Gunners on 18 points, one more than their nearest rivals before their next match against Spurs in the north London derby at Emirates Stadium on 1 October (12:30 BST).

Arsenal were bullied in the corresponding fixture last season and tamely went down 2-0 against newly promoted Brentford on the opening day of the 2021-22 campaign.

A lot has changed since then and this is a very different Gunners team full of grit, determination and character.

After a first setback of the season at Manchester United in their previous Premier League game, all eyes were on how they would respond against a Brentford side that embarrassed United five weeks earlier.

Despite the absence of influential captain Martin Odegaard because of injury, they dominated from start to finish.

Gabriel Martinelli once again put in an eye-catching shift, Saliba was strong at the back while Saka, who also teed-up Vieira, finished with two assists as the Gunners swept to a third clean-sheet away win of the season.

Ben White, left out of the latest England squad, also played a key role while the margin of victory could have been more but for two fine saves by Raya at 3-0 to keep out Jesus and Saka.

Arsenal have not played in the Champions League since 2016-17.

There is still a long way to go, but signs look promising for Arteta as Arsenal continue to build on a strong start and give their supporters hope they can qualify for European club football’s most prestigious competition.