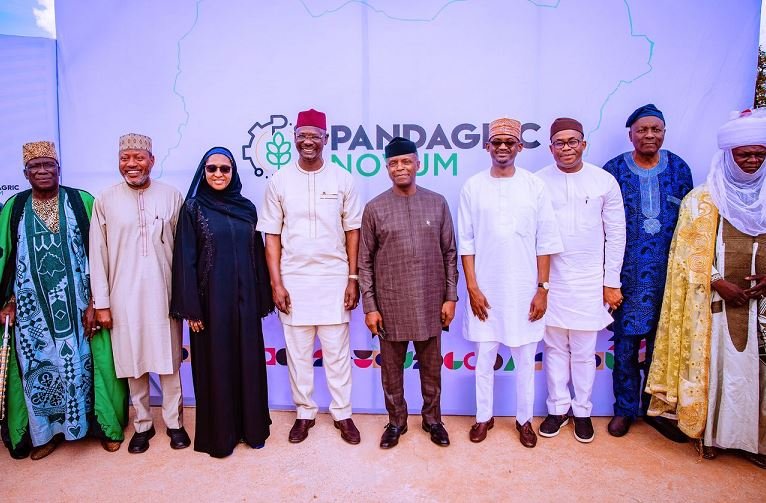 Vice President Yemi Osinbajo says in furtherance of its objectives on job creation and economic development, the Federal Government will continue to create the enabling environment to encourage more private sector investments in the agriculture sector.

Prof. Osinbajo said this Friday at the formal commissioning of Pandagric Novum Farms, an integrated feed and food manufacturing company in Panda community, at the Karu LGA of Nasarawa State.

The Nigeria Sovereign Investment Authority (NSIA) and Signature Agri Investments are major investors in the project.

Urging for more private sector investments in the agriculture sector, Osinbajo noted that the project’s commissioning was a foretaste of many possibilities and opportunities for investments, in agriculture and other sectors in the country.

“What you see today confirms that there is opportunity in Nigeria for investments in agriculture. While government commits to creating an enabling environment, we will look to the private sector for the investments to galvanize growth in the sector. We must indeed, work together to re-define agriculture for the future in Nigeria,” the Vice President said.

While extending the warm compliments of President Muhammadu Buhari to the people of the State, the VP said Mr. President “passionately believes in the role of the country’s agriculture sector as a key driver of job creation and economic growth.”

He listed instances in different sub-sectors of the agriculture value chain where the NSIA, as part its key mandates, has invested in over the last 10 years.

One of these investments is the Presidential Fertilizer Initiative (PFI), which was established by President Muhammadu Buhari in 2016 to address the problem of cost and availability of fertilizer.

Adding that NSIA was enlisted by the President as the project implementing entity, Prof. Osinbajo rolled out the achievements of the PFI, which was restructured in 2022.

“Over its 5-year run (2017 -2021), the programme has delivered over 30 million 50kg bags of NPK 20:10:10 fertiliser to Nigerian farmers, resuscitated the fertiliser blending industry, reviving over 60 otherwise moribund plans scattered across the country, created hundreds of thousands of direct and indirect jobs and enabled government conserve foreign exchange by import substitution amounting to over US$100million.

“With the sector now reactivated, the NSIA’s role in the fertilizer value chain has moved upstream,” Osinbajo noted.

Among others, Prof. Osinbajo also highlighted the Fund for Agricultural Finance in Nigeria (FAFIN) which was established by the NSIA in partnership with the Federal Ministry of Agriculture and Rural Development and the KfW (a development bank).

According to him “in 2018, the NSIA invested US$5.0 million in Babban Gona – a high impact, scalable agricultural franchise that seeks to sustainably improve the lives of smallholder farmers through the provision of credit, inputs, training in good agricultural practices, harvesting & storage services, and marketing services.”

Prof. Osinbajo further noted that in order to address both unemployment, local production growth and food security in particular areas of the country, the NSIA, in 2017, “established an Agriculture Development Fund under a 50:50 joint venture with the Old Mutual Group of South Africa, with a commitment of US$50 million (US$25 million each) towards the development and investment in large-scale agriculture projects, combined with out-grower schemes.

“In 2018, the Fund committed US$29 million towards the acquisition and two-phased development of the Pandagric Novum Farms, an animal feed processing business with backward integration through the farming of maize and soybean.”

Despite the global challenges as a result of the COVID-19 pandemic, the Vice President stated that “between 2018 and now, the Fund has successfully completed the development of Pandagric Novum Farms.”

Osinbajo observed that some of the key milestones achieved under this project include:
-the installation of a 147,000 metric tons per annum capacity poultry feed mill;
-the installation of 75,000 tons of storage infrastructure in the form of two silos, six bunkers, as well as 35,000 tons of raw material and finished goods storage;
-the installation of 750ha of center pivot irrigation systems;
-the leasing of 3,500 ha of land for the cultivation of maize and soybeans;
-the construction of a 1.4 million cubic meter reservoir for water management; and
-the successful planting of 856ha of maize and 1,200ha of maize during the 2021 and 2022 wet farming seasons respectively.

Prof. Osinbajo also lauded Pandagric for providing boreholes for all six of its neighbouring communities and developing an out-grower scheme, while providing inputs and training to over 500 small holder farmers.

“It employs almost 800 direct staff and 2,000 indirect staff, making it the largest contributor of PAYE to Nasarawa State; and presently has the largest maize farm across the country,” the VP said.

Commending the Nasarawa State Governor, Abdullahi Sule “for the visionary zeal he has deployed in three and a half years to make Nasarawa the State of choice for Agricultural investment in Nigeria”, the VP added that the Governor’s support was fundamental in the completion of the project.

Prof. Osinbajo also commended the hard work and diligence of the Board and Management of the NSIA, Novum Farms and its partners on the project’s successful completion.

Earlier in his remarks, Gov. Abdullahi Sule of Nasarawa State commended the reinvigorated efforts of the Federal Government to support agricultural development across the country.

He added that though the project was conceived and pursued by his predecessors in office, ongoing efforts by the Buhari administration in the sector, made it possible for its completion.

Gov. Sule assured the investors and other stakeholders in the project of the state government’s continuous support, urging the investors to expand to other major agricultural production areas in the State.

On his part, the Business Development Manager of Signature Agri Investments, Mr Theo van der Veen said the company’s investment in the project is driven by its commitment to support food security and promote sustainable and innovative agricultural practice in Nigeria.

He said the company will leverage opportunities for more investments in agriculture in Nigeria starting with the expansion of the Pandagric project to cover more hectares of land.

The highpoint of the event was the commissioning and tour of the factory, the farm and storage facilities by Osinbajo accompanied by Governor Sule and other dignitaries.

The Vice President also planted a tree in commemoration of the ocassion.

Others present at the commissioning were, the Ministers of Finance, Budget and National Planning, Mrs. Zainab Ahmed; Environment, Mohammed Hassan Abdullahi; the Chairman and Board members of the NSIA, traditional rulers and other senior government officials.