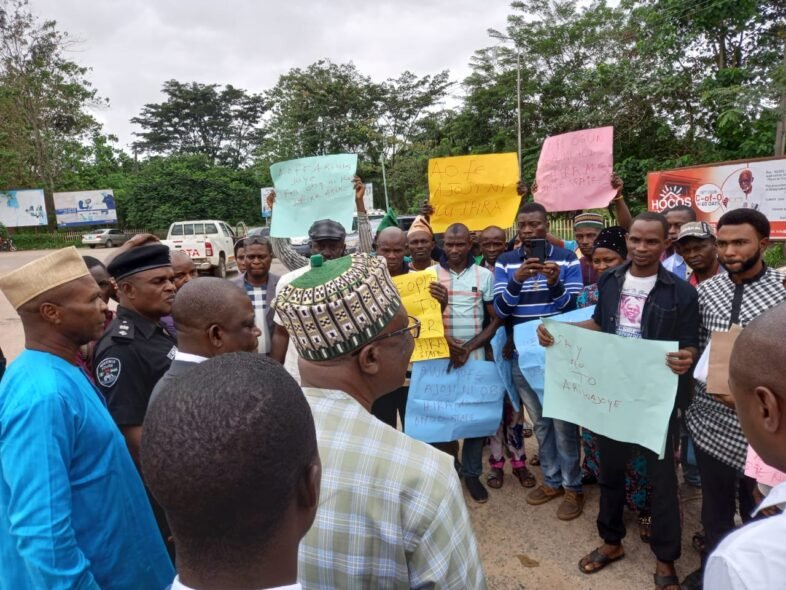 Youths from Ifira-Akoko in Akoko South-East Local Government Area of Ondo State on Monday staged a protest at the governor’s office in Akure, the state capital, against the alleged planned imposition of an obaship candidate on the community.

The stool of Ifira Akoko became vacant about two years ago following the death of Oba Anthony Olugboja.

The youths, who expressed their dissatisfaction over the kingship matter, urged the state governor, Mr Rotimi Akeredolu, to intervene before it degenerated into a full-blown crisis.

They carried placards with inscriptions such as, ‘We say no to Ariwajoye as king of Ifira, ‘Ifira people need a competent king’, ‘We don’t want person who doesn’t understand our dialect,’ among others.

The choice of the new Olufira of Ifira Akoko was allegedly manipulated by political appointees using the name of governor Akeredolu, according to the protesters, which raised the possibility of a crisis.

One of the protesters said, “We are aware that our governor has never been involved in the selection of any Oba in the state since assumption of office as the Executive Governor of our dear state, but some people in his government are out to tarnish his good reputation by scheming to impose an Owo person on the people of Ifira”.

“This move is not only a negation of our traditional values and cultural heritage, but it is also a taboo to our ancestral home, and the repercussions would be unimaginable”.

Addressing the protesters, the Permanent Secretary of the state Ministry Of Local Government and Chieftaincy Affairs, Mr Segun Odusanya, promised that government would look into the process carried out by the kingmakers and ensure that due process was followed.

Odusanya, however, described as untrue the claim that Governor Akeredolu sent anyone to manipulate the process, urging “the protesters to be law-abiding while expressing their grievances.”