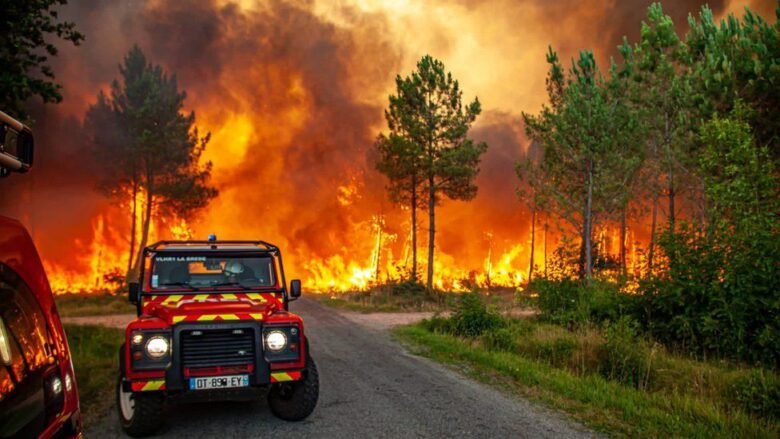 Wildfires tore through the Gironde area of southwest France on Wednesday, destroying homes and forcing the evacuation of more than 10,000 people, some of whom had climbed onto rooftops as the flames approached.

Fires continued to burn out of control despite the efforts of firemen supported by water-bombing planes. The area was covered in black-and-orange skies that were darkened by smoke rising from forests and lit up by the flames.

Fires, which have razed about 6,200 hectares (15,320), have now crossed in the neighbouring Landes region.

France, like the rest of Europe, has been struggling this summer with successive heatwaves and its worst drought on record. Dozens of wildfires are ablaze across the country, including at least eight major ones.

“Prepare your papers, the animals you can take with you, some belongings,” the Gironde municipality of Belin-Beliet said on Facebook before evacuating parts of the town.

Police had already gone door to door in the neighbouring village of Hostens warning citizens to evacuate as the fire spread. Taking their two cats, hens, and house insurance documents, Camille Delay fled with her boyfriend and son.

In ten minutes, a small twist of smoke grew significantly, the 30-year-old told Reuters over the phone. “Everyone in the village gathered onto their rooftops to observe what was happening.”

Firefighters said more evacuations were likely. Even so, some Hostens residents were reluctant to abandon their homes.

“It’s complicated to go with the dogs and we cannot leave them here,” said Allisson Horan, 18, who stayed behind with her father.

“I’m getting worried because the fire is in a plot of land behind ours and the wind is starting to change direction.”

Numerous small roads and a highway were closed.