US basketball star jailed for 9 years on drug charges
Advertisement 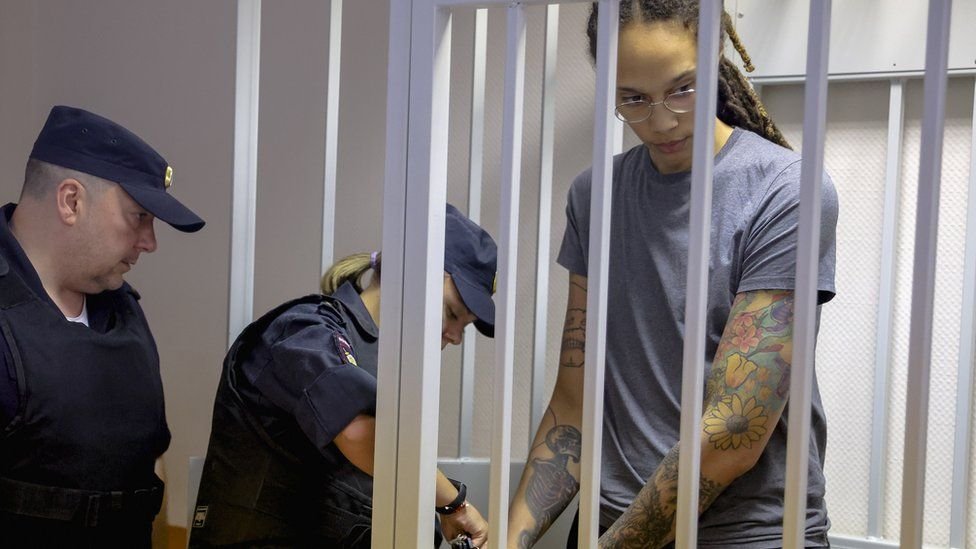 US basketball player Brittney Griner has been handed a nine-year sentence term for drug charges by a Russian court.

Griner, 31, was overheard saying, “I love my family,” as she was being led out of the courtroom in handcuffs.

The two-time gold medalist at the Olympics admitted to using cannabis oil, but she told the judge she had committed a “honest mistake.”

She was found guilty of drug possession and smuggling by the court close to Moscow. A nine and a half year prison sentence was what the prosecution requested.

The presiding judge said she had taken into account the American had already spent a significant amount of time in detention while reading the verdict on Thursday.

“She can hardly talk. It’s a difficult time for her. When we saw Brittney on Tuesday, we told her, ‘See you on Thursday’. She said, ‘See you on doomsday’. So it looks like she was right.”

I hope in your ruling it does not end my life, Griner cried

The defence team declared they would file an appeal against the judgement.

Griner was stopped in February at an airport close to Moscow when vape cartridges containing cannabis oil were discovered in her luggage. Griner is regarded as one of the best female players in the world.

During the off-season in the US, she had travelled there to play club basketball.

After then, Russia invaded Ukraine, and her situation has since been the focus of high-profile negotiations between the US and Russia.

“Unacceptable” is how US Vice President Joe Biden described the sentence.

Russia, as well as any nation that practises unlawful imprisonment, poses a threat to the security of everyone who travels, works, or lives abroad, according to US Secretary of State Antony Blinken.

It is unclear how long she will actually spend behind bars, as the US and Russia have been discussing a potential prisoner swap that could involve the basketball player.

Reports in US media suggest imprisoned Russian arms trafficker Viktor Bout – known as the Merchant of Death – could be transferred by Washington to the Russian authorities as part of the deal.

After Griner’s conviction, John Kirby, the White House’s national security spokesperson, pleaded with Russia to accept the “serious proposal” the US had made for Griner and fellow jailed American Paul Whelan.

“It is a serious suggestion. We implore them to take it. When we first created it, they ought to have accepted it weeks ago “said Mr. Kirby.

Griner stated, “I made an honest mistake, and I hope in your judgement it does not terminate my life,” after the court heard the closing statements.

She said, “I did not plan or conspire to do this crime.

In addition, Griner claimed that during the first few hours of her arrest, neither a lawyer nor an explanation of her rights were provided to her, and that she was forced to rely on a translation app on her phone for communication.