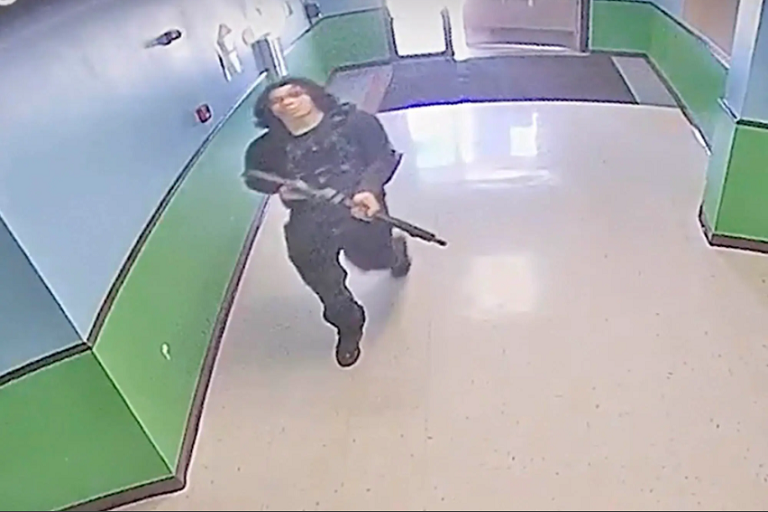 Salvador Ramos, the Texas school shooter, was left unattended at the morgue for nearly a month as his family argued over who was to blame and Uvalde’s funeral establishments turned him away.

On May 27, three days after police finally put an end to Ramos’ murder of 19 students and two teachers at Robb Elementary, an autopsy was performed on his body.

Ramos’ remains were eventually kept 150 miles away in a morgue in Lockhart, according to Uvalde’s de facto coroner, Eulalio “Lalo” Diaz Jr., who spoke to the Houston Chronicle about how the city’s two funeral houses refused to handle him.

“Once they got to him, the funeral homes in town said, ‘We don’t want to deal with him,’” said Diaz, a Justice of the Peace also overwhelmed dealing with the deaths of immigrants in a human-smuggling horror in June.

As the funerals for the victims were going on, I was still dealing with what to do with him. It was a stressful time.”
Ramos’ dysfunctional, fractured family also fought over his remains at the same time, according to Diaz. Before beginning his massacre at the school, the disturbed adolescent shot his 66-year-old grandma Celia Martinez Gonzales, who was still alive.

Eventually, Ramos’ funeral arrangements were handled by Castle Ridge in Crystal City, which is at least 40 miles away from Uvalde.

The Houston publication stated, without specifying a date, that Ramos was ultimately incinerated even further afield, in a plain structure on the outskirts of downtown San Antonio, more than 80 miles outside of Uvalde.

“However, in the weeks following the shootings of May 24th, we were caring for 17 families … through what is probably the most difficult time in their lives,” she said.

“Under the circumstance, we did not feel it would be appropriate or in the best interest of the families for which we were caring to take custody of the remains of the individual that caused their pain.”

Complete autopsy findings for Ramos and his 21 victims could take up to a year to be completed, according to Diaz, in part because the Bexar County medical examiner also needs to perform 53 autopsies for immigrants who died in late June while being smuggled inside a tractor-trailer.

“That’s 75 extra people added to their normal workload,” Diaz said. “We’re three months in, and all I’ve got is the preliminary reports.”

The massacre at Robb Elementary was the second-deadliest school shooting in American history.